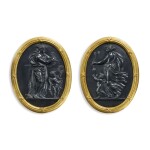 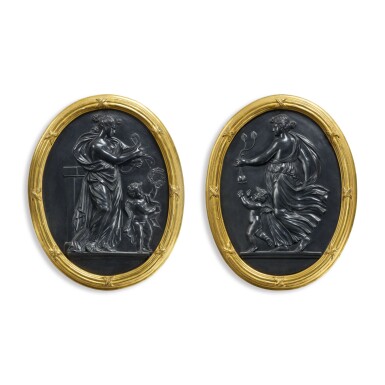 non-period, non-factory, modeled in high relief with a classical maiden and cupid to each, impressed lowercase Wedgwood & Bentley marks, mounted in giltwood frames.

Please note: the plaques have not been examined out of their frames. Both in generally good condition overall. Figure with lyre: two tiny firing blemishes to her bun; two faint firing tears between the maiden and cherub. Figure with tassels: minor firing tear across cherub's wing,

Collection of Theodore and Rosalind Spak, Miami, no. 329 bearing label, 1984

A non-period, non-factory plaque of 'Night', of identical large size to the present lot, is illustrated and discussed in Gaye Blake-Roberts, Pat Halfpenny and Lynn Miller, 'Wedgwood and Bentley: The Art of Deception', Ars Ceramica, 1994, p. 42, pl. 54, as part of a wider discussion of such pieces believed to have been made in England in the third quarter of the 20th century. The authors note that no Wedgwood and Bentley examples of the size were known to them, although the model in that size is noted in Wedgwood's Catalogue of 1773. The present plaque of 'Night' shares the characteristics of the example illustrated and other non-period, non-factory black basalt wares, leading to the conclusion that the present pair are later copies and not of Wedgwood manufacture. A pair of similar type was sold at Doyle New York, January 29, 2014, lot 295.