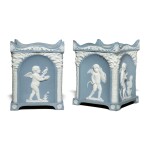 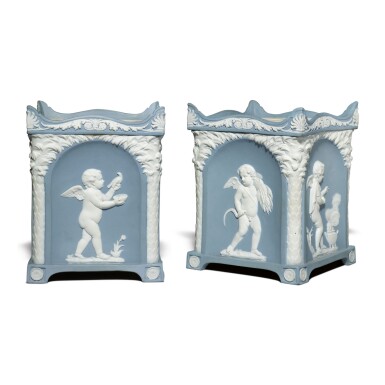 the solid-blue body applied on each side with the figure of a cupid representing one of the Four Seasons, the corners with palm trees, with white jasper pierced covers, impressed uppercase WEDGWOOD and letter V.

Each bulb pot with two corners at the rim restored, and some restoration to all four feet. One cover slightly ill fitting.

The relief figures purchased from John Flaxman Sr on April 11, 1775: 'Four Basso Relievos of the Seasons £2.2. The figures are adapted from those seen on the 'Marlborough Gem', after its Aristocratic owner. It is now preserved in the Museum of Fine Arts, Boston, cataloged as depicting the wedding of Cupid and Psyche, or an initiation rite acc. no. 99.101. See a further example illustrated in David Bindman (ed.), John Flaxman, London, 1979, p. 51, no. 23b.