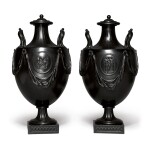 each of shield shape, affixed with upright loop handles at the shoulders suspending drapery from rings, the front applied with a medallion showing 'The Three Graces' or the 'Sacrifice to Aesculapius', Greek god of medicine and healing, the neck and foot with engine-turned banding, impressed Wedgwood & Bentley marks.

One cover with finial knop re-stuck at terminal, and two small flat shallow chips to upper edge of rim. Both vases are bolted to the square feet and may have been re-affixed. Overall the vases are in good condition and appearance.

On May 1st, 1769 Josiah proclaimed his intention of becoming "Vase Maker General to the Universe" in a letter to Thomas Bentley. He further wrote in his letter "Mrs Byerley is just return'd from London & brings a strange acct. of their goings on in Newport Street, No getting to the door for Coaches, nor into the rooms for Ladies & Gentn, & Vases, she says, Vases was all the cry - we must endeavour to gratify this universal passion", referenced by Gaye Blake-Roberts, Wedgwood, A story of Creation & Innovation, London, 2017, pp. 54, 107.