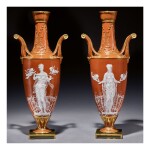 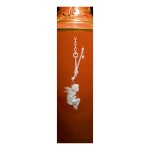 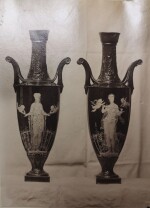 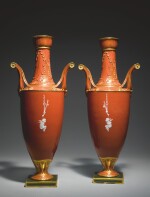 shape number 1986, by Marc Louis Solon, signed respectively 'L SOLON', 'MINTONS'; and 'L. SOLON 78', each of campana shape, affixed on either side of the shoulder with a high scroll handle terminating with an anthemion leaf, the cup-form rim above the tall slender neck molded with anthemion and acanthus enriched in gilding, the body decorated in white slip with a maiden in diaphanous costume before a fence with trailing flowers, flanked by two putti offering her hearts, or a maiden holding a sword to a heart on a platter, each reverse with a putto on a weighing scale, on bronze-green square bases, gilt retailer's marks PHILLIPS & PEARCE/ MINTON/ NEW BOND St LONDON, impressed MINTONS marks.

An entry for this vase shape, Liberty and Captivity appears in the list of titled pâte-sur-pâte wares for 1876 by Solon, Joan Jones in Minton, The First Two Hundred Years of Design & Production, Shrewsbury, 1993, p. 338.  This vase was of the same ground-colour as the present pair and was sold at Christie's New York, October 10, 2001, lot 188, previously sold at Sotheby's New York, February 21, 1991, lot 25. This vase, along with its pair, Liberty, together with the present pair, feature in the Minton photographic archive. A second pair, also of the same ground color, dated 1877, was offered at Christie's East New York, October 11, 1988, lot 438. Phillips were London retailers of china and glass ware. The business was started by George Phillips at Oxford Street, London - the premises were ‘next to the Pantheon’. At the circa date of the present vases the retailers had premises at 155 New Bond Street.