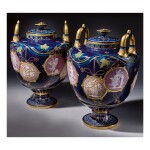 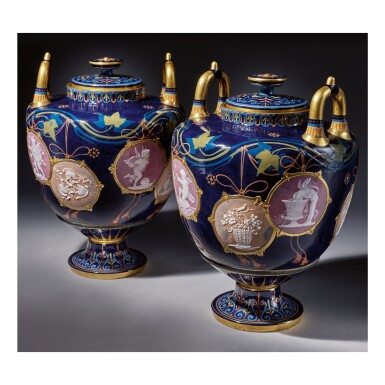 Both vases are in overall good appearance.

There is some very minor typical wear to gilding on loop handles and interior edge of rims. Both vases and covers are in good condition.

When last sold the auction cataloging note made reference to Louis Solon's Illustrated Journal, where the present pair of vases is recorded as being completed between November 11 - December 11, 1874. The journal notes "Medaillions sur une paire de vases commence pair (Henry) Sanders" and a minimum of 65 days of combined labor on the pair.

A second pair of vases of this form, completed in 1888, with chocolate brown panels and grotesque-type decoration on an ivory-ground was displayed on the Thomas Goode stand at the 1889 Paris Exposition Universelle. This pair is illustrated in Joan Jones, Minton, The First Two Hundred Years of Design & Production, Shrewsbury, 1993, p. 201; and Bernard Bumpus, Pâte-sur-Pâte, The Art of Ceramic Relief Decoration, 1849-1992, London, 1992, col. pl. XXI, where the author notes that the work on the pair was completed by "an apprentice". The pair was sold at Christie's New York, October 19-20, 2011, lot 462. A third pair with white-slip figural decoration on a green-ground, signed by Solon, with retailer's mark for A.B. Daniell & Sons, London, was sold at Freemans, Philadelphia, October 7, 2014, lot 56. Reviewing the Minton photographic archive reveals that at least one further pair was produced, with white slip figures holding lamps, against a solid coloured-ground.