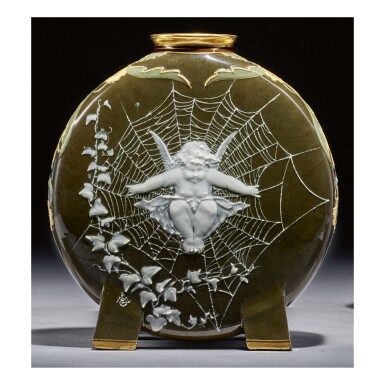 This vase model and design was one of Solon's earliest creations at Minton. A vase of this form and decoration was included in Minton's display in the London International Exhibition of 1871, as shown in the Illustrated London News, illustrated in Bernard Bumpus, Pâte-sur-Pâte, The Art of Ceramic Relief Decoration, 1849-1992, London, 1992, p. 103. The exhibition was held in May and Solon had joined the manufactory just eight months prior. The Times reported of Minton's display and the pâte-sur-pâte technique, "The attention of Messrs. Minton and Co. has for some time been directed towards the production of work of this kind; but, prior to the war, it was impossible to obtain in England an artist possessing at once the necessary taste and skill...", cited from Bumpus, op. cit., p. 102. The example exhibited in 1871 is now in the collection of the Bowes Museum, County Durham, England. Solon wrote of it "Bonne, décousus dans les blancs" (good, breaks in the whites). A pair of flasks of this decoration was sold at Chrsitie's London, July 28, 1980, lot 52.