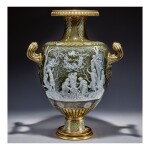 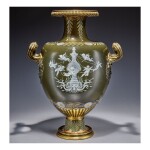 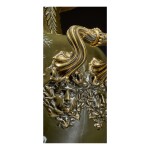 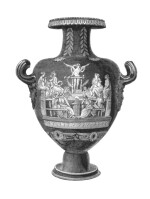 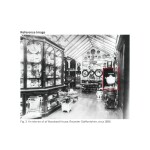 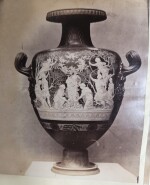 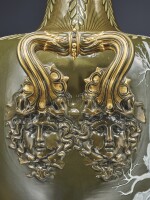 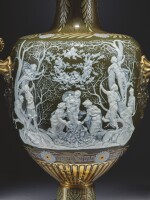 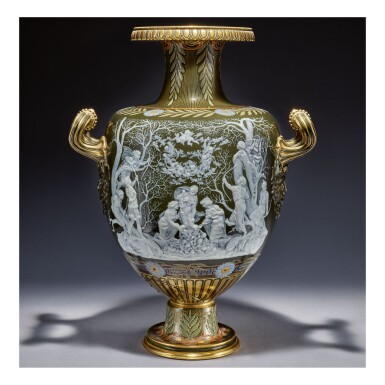 The vase has an old repaired section located at the gilt dart border around the lower part of the body which is visible in the catalogue illustrations of the front and back. This is formed of three break cracks which are secured by pins and secured by screw tops in the interior. Some small losses and re-gilding along cracks. The nature of the repair suggests it occurred close to time of manufacture. The repair does not affect the pate-sur-pate decoration which is in good condition and appearance.

A second vase of this shape and near identical figural design was produced in 1887 and was retailed through Tiffany & Co., New York. The vase was later sold in The Hochstetter Estate sale, Parke Bernet, New York, January 13, 1956, lot 120, then again, The Estate of Wilfred Swall, Sotheby Parke Bernet, Inc. New York, April 20-23, 1983, lot 466; and most recently at Christie's New York, April 11, 2007, lot 287. Reviewing the Minton photographic archive material reveals that a third vase with this decoration existed, differing with the addition of a band of hearts under the front figural panel. This example appears unglazed and therefore may not have been completed (fig.1).

A fourth vase of the form, titled La pêche, was included in Thomas Goode's display at the 1889 Paris Universelle Exposition, illustrated in Bumpus, 1992, pl. XXII, frontispiece. An earlier fifth vase, titled Cupid Lecturing on Love, as referenced by Bumpus, 1999, p. 15, and dated 1877, was made for the 1878 Paris Exposition Universelle, reproduced in the Illustrated Catalogue of the Paris Exhibition, published by Virtue, London, 1878, p. 34 (fig.2). This vase was referred to in the Pottery Gazette review of the 1878 Exhibition, "The pâte-sur-pâte painting of Monsieur Solon completely places in the shade anything from the Royal manufactory. A large green-bodied vase is an exquisite specimen - all the sculpture and relief magnificently worked out, and the perfect transparency of the figures, is rivalled by nothing from Sèvres." This vase was also in the collection of Wilfred Swall, sold, his estate sale, Sotheby's New York, July 18, 1984, lot 331. A sixth, titled E finita la musica, of circa 1900, was sold at Sotheby's New York, June 24, 1999, lot 55

It is unclear which, but either the present vase, the example retailed through Tiffany & Co., or the third, which features in the Minton archive photography records, appears in two photographs from a series, dated June 16 and 19, 1886, of the interiors of Woodseat House, Rocester Staffordshire, owned by members of Minton family, John Fitzherbert Campbell (1861-1918) and his wife Mary Thereza (née Nicholl) (1862-1928) (fig.3). The vase appears on an elephant head-modeled wooden base in the conservatory, next to cabinets filled with Minton pâte-sur-pâte, majolica and porcelain. As the photographs are dated 1866, and the Tiffany vase was completed in 1877/8 it seems highly likely the vase visible is the present example, or that seen in the Minton photographic archive.

Reviewing the archive reveals that at least two other vases of this impressive form were produced, one of which appears unglazed in the photograph, and therefore may not have been completed. The current whereabouts of these two vases is unknown.