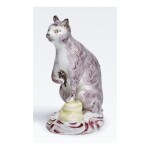 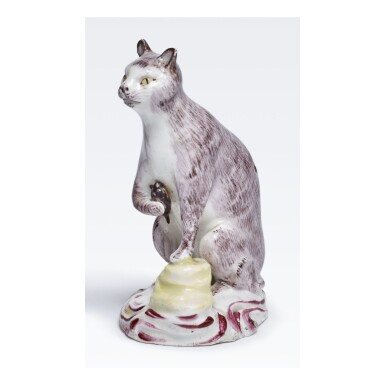 modeled seatedupright on its haunches holding a mouse in its paw, another mouse running into a hole on the puce-scroll-edged mound base.

In overall good appearance. Both ears restored, and an area of its front right leg with restoration, probably re-attached. A small flat firing fault to its back on left edge.

In response to your inquiry, we are pleased to provide you with a general report of the condition of the property described above. Since we are not professional conservators or restorers, we urge you to consult with a restorer or conservator of your choice who will be better able to provide a detailed, professional report. Prospective buyers should inspect each lot to satisfy themselves as to condition and must understand that any statement made by Sotheby's is merely a subjective qualified opinion. NOTWITHSTANDING THIS REPORT OR ANY DISCUSSIONS

CONCERNING CONDITION OF A LOT, ALL LOTS ARE OFFERED AND SOLD "AS IS" IN ACCORDANCE WITH THE CONDITIONS OF SALE PRINTED IN THE CATALOGUE.

An example of this model was in the collection of Lady Charlotte Schreiber which she donated to the Victoria and Albert Museum, London in 1885, mus. no. 414:33-1885. A further model from the collection of J.W. L. Glaisher is in the Fitzwilliam Museum, Cambridge, acc. no. C.3044-1928.

This model is recorded in the form of a scent bottle at Chelsea, an example of which from the collection of Otto and Magdalena Blohm was sold at Sotheby's London, April 24, 1961, lot 271. It was also produced as a scent bottle at the St. James (Charles Gouyn) factory, for which see the example formerly in the collection of Mrs. Mayer Sassoon, sold at Sotheby's London, October 12 1965, lot 54, illustrated in Kate Foster, Scent Bottles, London, 1966, p. 58, pl. 43.