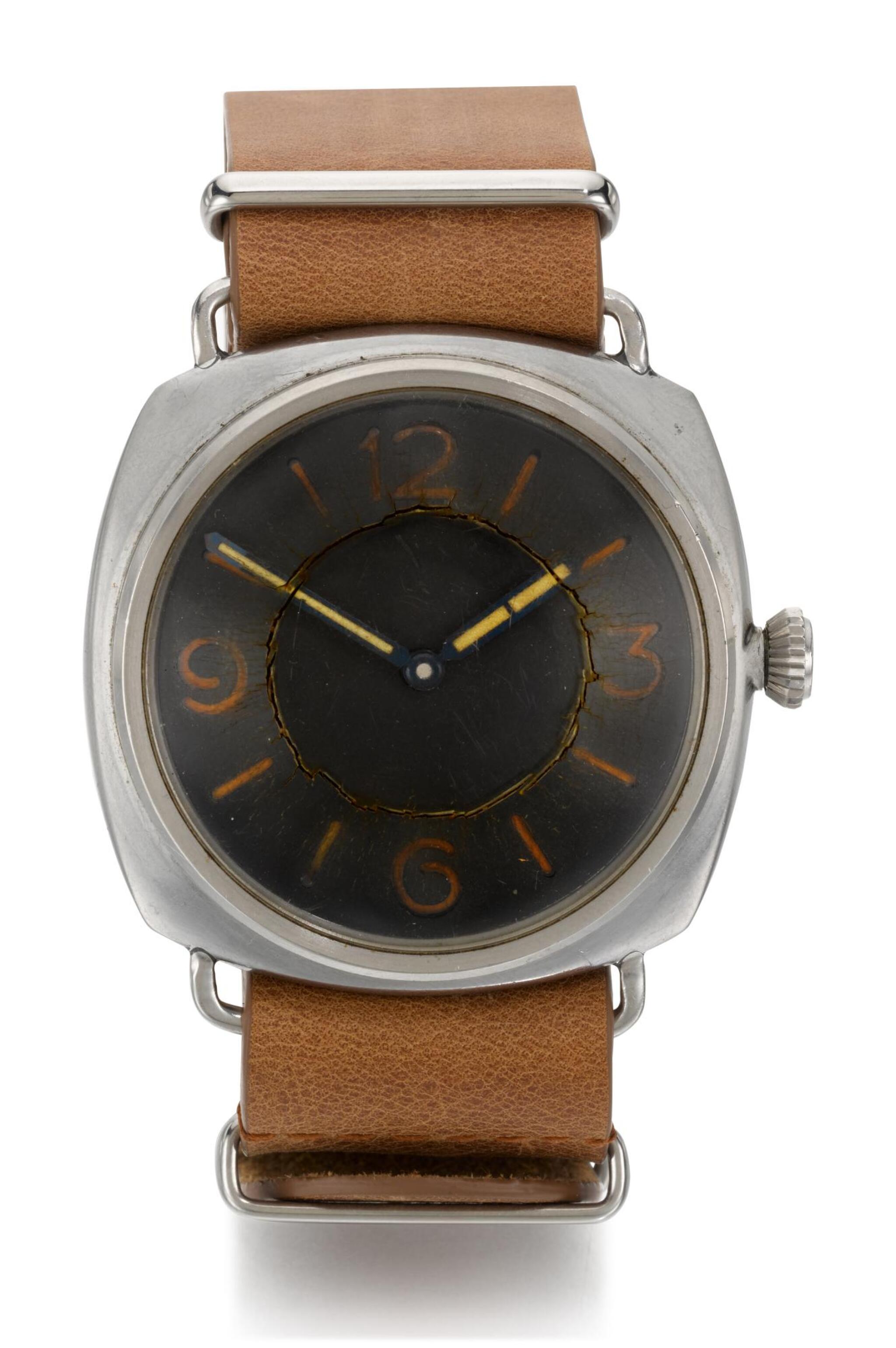 DIAL: with even patination throughout.

CASE: in overall good condition, with scuffs and marks throughout consistent with age and wear of the timepiece. Original crystal slightly opaque and discoloured with small cracks.

MOVEMENT: running at time of cataloguing

Please note: Condition 11 of the Conditions of Business for Buyers (Online Only) is not

applicable to this lot

Panerai developed the reference 3646 in collaboration with Rolex for the Royal Italian Navy, in particular for their Frogmen who needed a reliable and legible watch in the extreme conditions endured during long and deep water diving. In order to improve the readability of the watch, the sandwich dial was developed. While it has been recently demonstrated that Panerai did not invent it, it has become one of the signature elements of these watches. It consists in two overlapping plates, the lower bearing the radium paint and the upper with large perforated indexes, 12, 3, 6 and 9 in Arabic numeral and the rest as batons. The reference 3646 was a testament to ingenuity and technological advancements as it could withstand extreme conditions, remain legible in pitch black darkness and still display the time with accurate precision. Rolex provided their caliber 618 which ensured precision timekeeping and also helped with the initial waterproofing of the cases, by having the type B produced under the Oyster Watch Co.

According to academics, the present lot is an early type D example as the inner caseback is stamped with the Rolex signature, the serial and reference number. The later type E watches had the Rolex branding removed and only bear the number stamped inside the caseback.

The present lot is well-preserved and in original condition, with the original plexiglass, dial and hands. The movement has recently been carefully restored by a specialised watchmaker.

The timepiece was preserved until today within the family of Sergeant H. Fisher, N.C.O, a member of the 5th British Infantry Division, B.A.O.R. (British Army of the Rhein) where he was a German-English interpreter during war crime tribunals after the second World War. This lot includes several letters of recommendation of Sergeant Fisher, where his superiors, such as his Captain and Colonel speak of him in the highest terms.

This lot not only includes these letters of recommendation, but also fascinating original transcripts of the defendant’s pleas that took place in Auschwitz and Mittelbau-Dora.