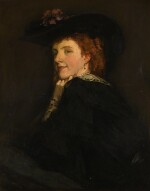 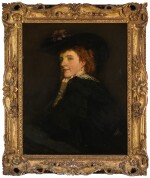 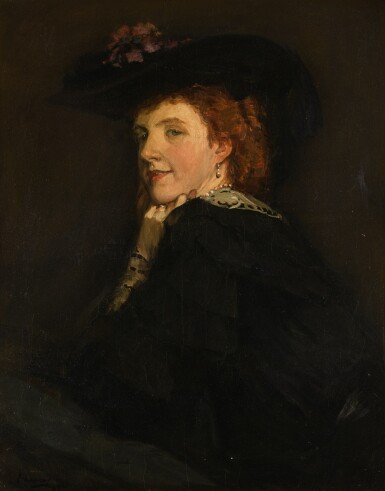 signed and dated l.l.: J. Lavery/ 05; also titled, signed, inscribed with the artist's address and dated 1905 on the reverse

Original canvas. There are frame abrasions to each edge with occasional resulting paint losses. Some faint areas of paint separation visible in the background and lower third of the canvas which are stable only visible upon close inspection. Overall the work appears in good condition and should respond well to light restoration.

The sitter and thence by descent to her son, Edmund J Birkbeck, by whom bequeathed to the present owner in 1984

In 1905 Lavery produced an intimate and engaging portrait of Dora Ethel Birkbeck, facing away from the spectator, but throwing a captivating smile over her left shoulder. Visually it was a satisfying pose – one that caught a distinctive personality and combined it with what critics termed belle allure. At the time, the painter was working on a full-length, to be named Polyhymnia after the goddess of lyric poetry, in which a young model, probably Idonea Laprimaudaye, dressed in black, is leaning on a piano. In 1909, this majestic performance was acquired by the Italian national collection and what it expresses in ‘the psychology of social butterflies’, according to Walter Shaw Sparrow, Mrs Birkbeck gains in character and directness.

The circumstances in which Lavery and the Birkbecks first came into contact remain a mystery. In 1902 the wealthy East Anglian watercolourist, Geoffrey Birkbeck (1875-1954) had converted to Catholicism and in 1903 was elected to the Royal Society of British Artists (RBA). Although in younger days he too had shown at the RBA, Lavery’s allegiances lay elsewhere, and much of his recent work was immediately consigned to galleries in Europe and North America. However, in July 1904, when Birkbeck married Dora Ethel Wilson (1873-1925), the daughter of James Christopher Wilson of Wilton Crescent, London, at Brompton Oratory, the opportunity arose to commission his wife’s portrait from Lavery. Sittings are likely to have occurred before the birth of the couple’s daughter, Theodora Clare Birkbeck in 1905.

Clearly a successful portrait, the picture may, at Birbeck’s insistence, have been retained by the family for a fixed period before being released for exhibition. Such arrangements were not uncommon. It was however lent to the International Society’s exhibition at the New Gallery in London, in January 1909. Lavery, having managed the society’s presidents, James McNeill Whistler and Auguste Rodin, as vice-president, had recently passed the baton to William Strang, but remained a regular exhibitor. Such was the critical success of the present work that the artist retained it, presumably with the owner’s agreement, for the forthcoming Paris Salon.

Commentators were enraptured by the ‘easy naturalness’ of Mrs Birkbeck’s portrait and although it hung close to Orpen’s A Young Man from the West, and works by William Nicholson and Charles Haslewood Shannon, The Northern Whig was confident that it ‘will by many be considered the best portrait in the exhibition’. For others the picture was ‘like a ray of sunshine in the midst of the depressing gloom’ and such was its critical success that the artist retained it for the forthcoming Paris Salon. There was a sense that in pictures like this, the golden age of eighteenth-century portraiture was being reborn - Mrs Birkbeck’s hauteur echoes that of Romney’s much-loved Mrs Robinson – Perdita (1780-1, Wallace Collection, London)

Lavery, like other portrait painters of his generation, was acutely conscious of the art of the past, and by 1909 the Naturalism and Impressionism of his youth had been replaced by an eclectic mélange in tune with Edwardian taste. There was a magnetism conferred on pictures that transcended mere face-painting and Lavery reveals what one critic had recently described as ‘the grace of a woman’s movement, even of her thought’ (The Globe, 24 June 1908, p. 4).

Five years after Dora Ethel’s death, in 1930, her husband remarried Maud Gundreda Barret, sister of the Earl of Cavan, but the much-admired picture of his first wife remained in the family collection – a potent souvenir of the great period of Edwardian portraiture when Lavery’s position as one of the leading artists of his generation would shortly be confirmed by the honour of a retrospective at the Venice Biennale.