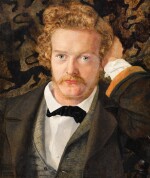 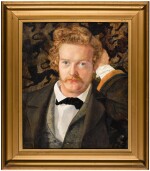 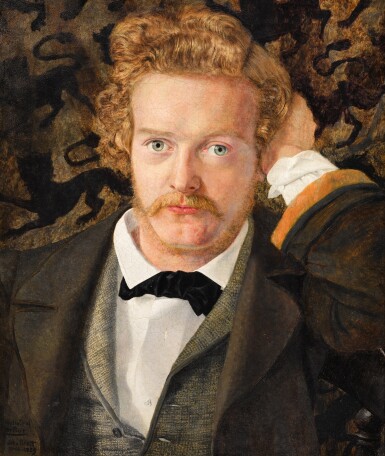 The canvas has not been lined

There is craquelure throughout the work, notably to the sitter's face and shirt. A few scattered specks of surface dirt and some rubbing and abrasian to the surafce edges. Otheriwse work appears to be in fair condition.

Held in a plain gold frame.

Please note the following amendments to the printed catalogue: Extra information on this lot has been provided by Charles Brett and is available on the online catalogue

By descent through the artist’s family

'I long to see him a real knight seeking adventures the other side of the world, to see all his dreams realized: I would think it enough pleasure for a life... to help the bringing about of them and eyes to see it.' (John Brett's diary, 25 December 1858, p.64, quoted in Christiana Payne and Charles Brett, Objects of Affection - Pre-Raphaelite Portraits by John Brett, 2010, p.44)

This beautiful portrait was painted by Brett as a record of fraternal affection in the late winter or early spring of 1859. Arthur Brett (1838-1898) shared lodgings with his brother in London between 1853 and 1854 when he was a student of music and trying to carve a career as a pianist. On Christmas Day 1858 John Brett wrote 'the sound of his exquisite and wonderful music is just the most melancholy thing in the hemisphere to us now' which referred to Arthur's decision to enter the army. It has been suggested by Christiana Payne that Brett's choice of background was very deliberate '... a piece of fabric decorated with lions passant guardant, an allusion to the Royal Arms of England, suggests that he had in mind the heroic deeds and chivalrous nature of Arthur's namesake, King Arthur, recently celebrated in Tennyson's Idylls of the King'. (ibid Payne and Brett, p.44)

The following information was provided by Charles Brett to whom we are very grateful;

In the autumn of 1858 Arthur Brett visited his brother John, then at work on his iconic view of the Val d'Aosta (Private collection) at the Chateau de St Pierre. Brett Sketchbook 5 (National Maritime Museum) contains two very detailed pencil drawings of Arthur, dated Oct 22 and 26 1858. In these he is depicted in a similar pose and identical clothes to those he is wearing in the oil portrait, indicating that they provided the source for the later work.