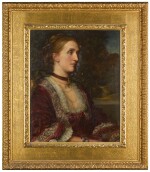 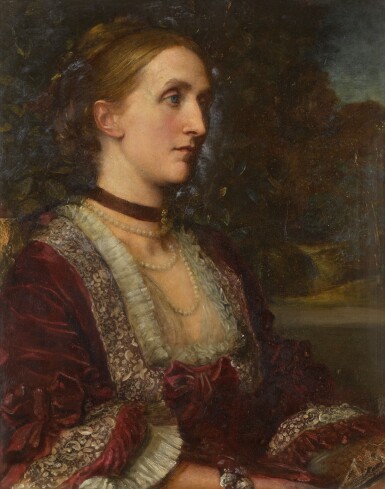 The picture is unlined and in very good overall condition. There are areas of craquelure - to the tree on the extreme right, to the bow at the centre of the dress, to the left sleeve, to the neck and to the right of the face. The paint surface is a little dirty. There are areas of bloom around the head which show on the catalogue illustration. These condition issues could be effectively alleviated with sensitive restoration

Commissioned by the sitter's husband George Moore of Whitehall, Wigton, Cumbria and 15a Kensington Palace Gardens, London and thence by descent

Agnes Jane Moore (nee Breeks 1833-1888) daughter of Richard Breeks, was the second wife of Mr George Moore, owner of Copestake, Moore & Crampton, a manufacturer of 'lace and sewed muslins, scotch and Manchester goods, cambrics and lawns, crapes, gossamers, velvets, stays, artificial flowers, millinery, baby linen, mantles, outfitting, shawl and haberdashery, umbrellas and parasols', (according to a commercial directory of 1865) whose portrait Watts also painted. Watts painted Mrs Moore in a red velvet gown trimmed with the beautiful lace which made her husband prosperous until his sudden death when he was knocked down by a runaway horse in Carlisle in 1876. Watts and Moore may have met through their shared philanthropic interests, such as Moore's support of the Field Lane Ragged Schools, the Commercial Travellers' Orphan School, Royal Hospital for Incurables, British Home for Incurables, a special branch of the Female Mission Among Fallen Women and the Little Boys' Home.