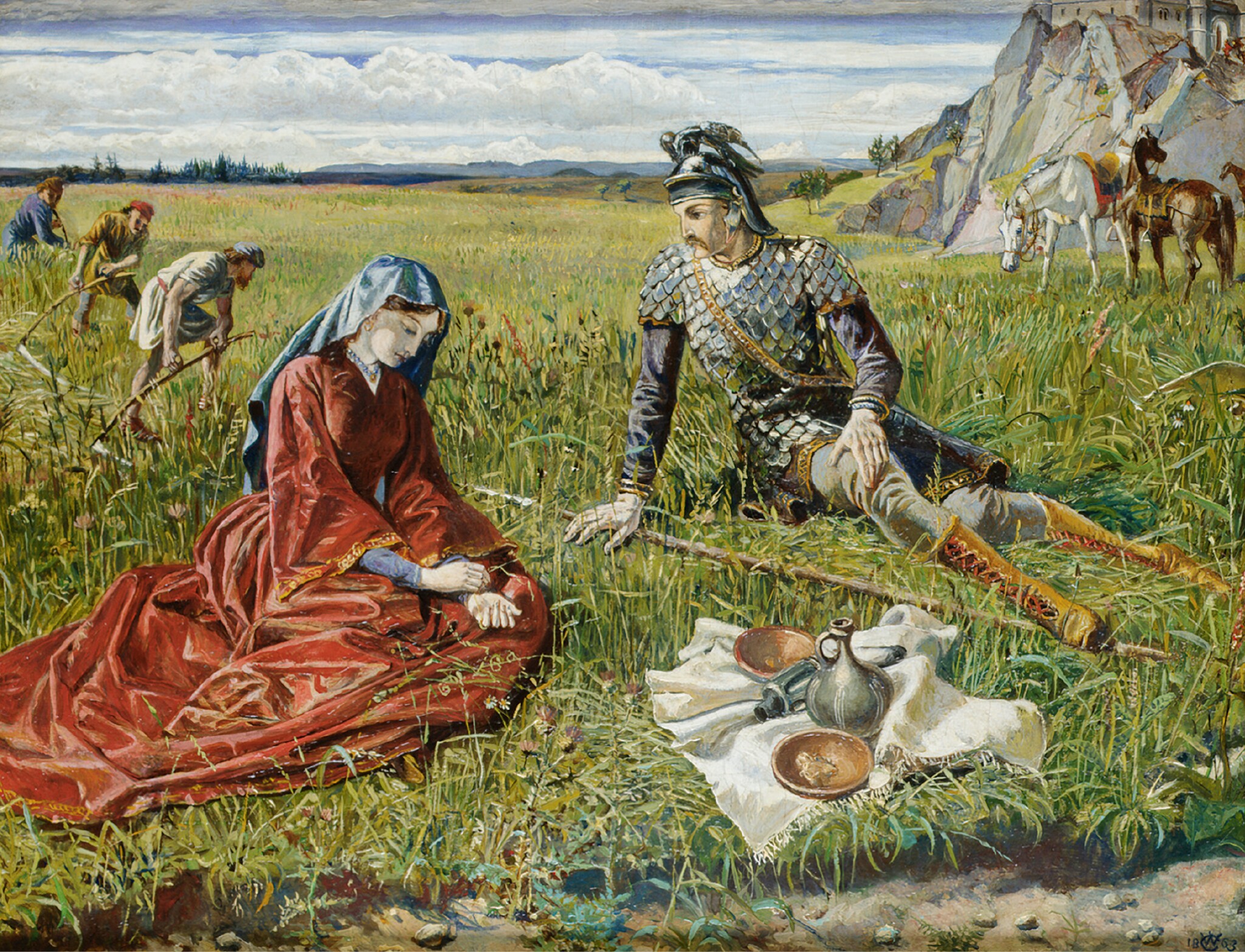 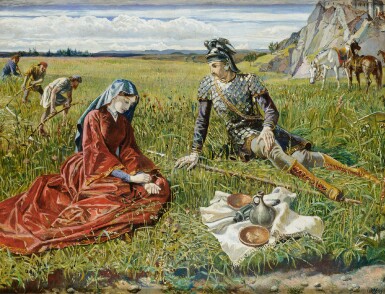 ﻿signed with monogram and dated l.r.: WC 1863; signed and inscribed on the stretcher: Walter Crane painted for Dr Hood given by him to GHH 1863

The canvas has been lined. There are some areas of old scattered craquelure particularly to whiter paint in the sky and on the blanket which is stabilised by the lining.

This Old Testament subject was painted by Walter Crane when he was just eighteen years old. The story of Ruth describes the tribulations and insecurities of daily life in ancient Israel and is a testament to the power of family loyalty and faithfulness. Ruth, who was a Moabite rather than a Hebrew, was married to Mahlon. They travelled to Moab on the eastern shore of the Dead Sea and in the company of his mother Naomi at a time of famine in Judah. When Mahlon died, leaving Naomi and Ruth defenceless, Ruth vowed to care for her mother-in-law, who she loved, and set about providing for her by gleaning in the harvest fields. Word spread among the Jewish community in Bethlehem about this exemplary young woman, and in due course Boaz, a kinsman of Naomi, took notice of her. He instructed his workers to provide her with grain to make bread and eventually he married her.

Crane's immediate purpose in taking this subject is not recorded. Although not subject to proof, it seems likely that the stretcher inscription was made by Dr William Charles Hood, who had been appointed as 'physician superintendent' director of the Bethlem Hospital for the Criminally Insane at the age of twenty-eight in 1852. If Hood is correctly identified as the recipient of the painting, then the person to whom he in turn gave it, indicated only by the initials GHH, must have been his steward at Bethlem, George Henry Haydon. These were two men of enlightened vision who sought to provide humane conditions in which the inmates of the hospital might live, and by attempting to understand the mental state of their patients. In 1864 the hospital transferred from London to the newly constructed Broadmoor in Berkshire, where Hood continued his campaign to care for and understand the criminally insane. The most notable of all Hood's patients was the painter Richard Dadd, who was incarcerated at Bethlem and subsequently at Broadmoor for the murder of his father in 1843. Dadd painted Hood's portrait in 1853, and was otherwise encouraged to work by Hood, who provided him with painting materials and eventually formed a collection of thirty-three of his works, including the masterpieces Oberon and Titania (Lord Lloyd Webber collection) and The Fairy-feller's Master-stroke (Tate).