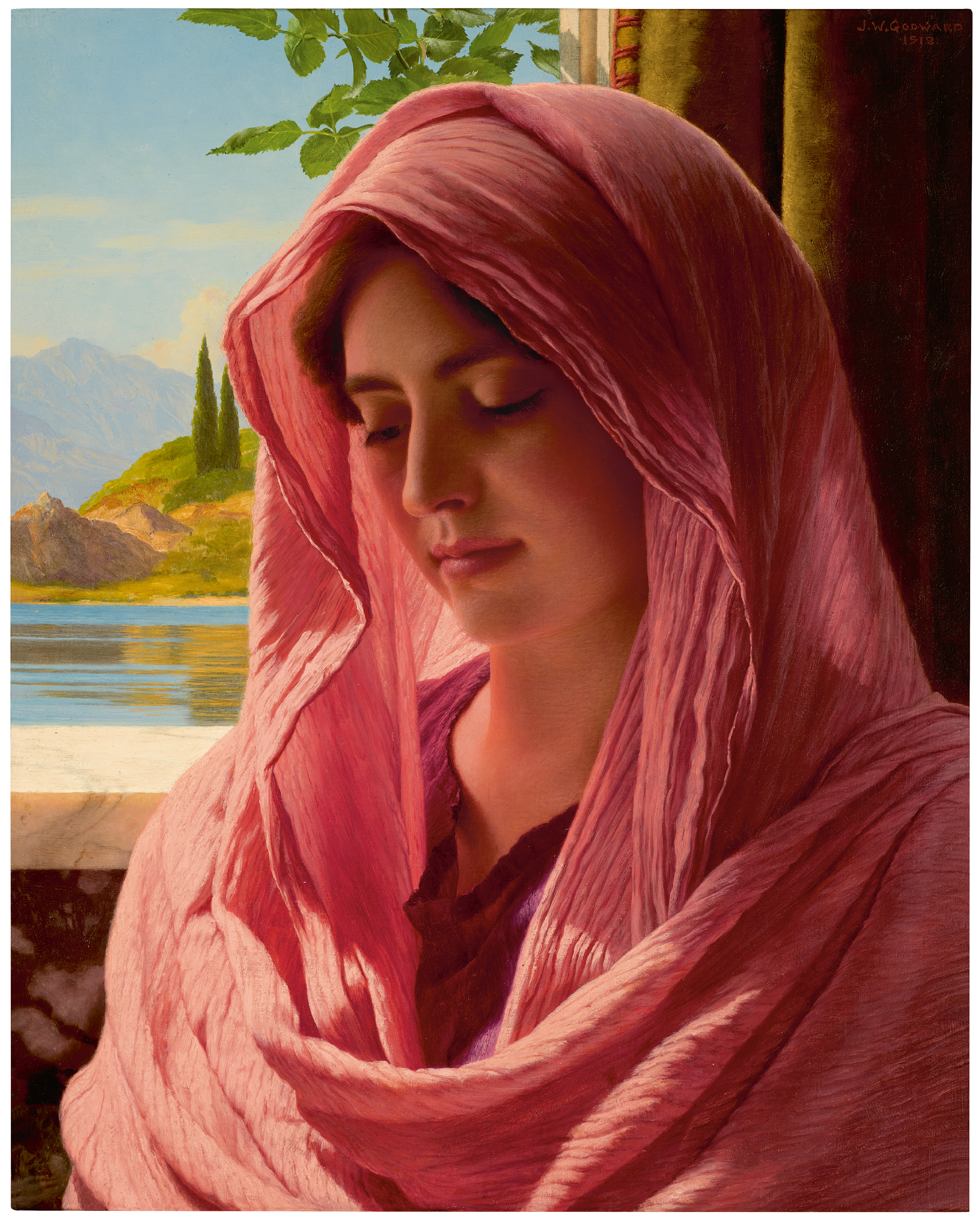 This picture is unlined and in excellent condition. The paint surface is clean and there are no visible condition issues. The picture is ready to be hung.

There are cosmetic flecked retouchings to the purple drapery at the girl's throat and to a small area on the edge of her veil, further minor retouchings to her hair-line and the line of her chin and on her lips. These retouchings are not excessive and have been well executed.

The picture is contained in a moulded plaster sweep frame.

W.B. Simpson, Glasgow, where purchased by the father of the present owner

'Godward's art was more than escapist; it was purposely beautiful in an age plunging headlong into atrocity. He sought to portray peace, feminine charm and ideal perfection by marvellously painted and composed classical pictures of beautiful women in halcyon marble environments. In this he was far more than a mere painter of 'beauties' but rather a creator of an imaginary world of bygone serenity painted with the utmost clarity and idealism.'

With her veil of soft, rose-hued material and her downward expression, Pyrallis is a particularly modest and introspective study of female beauty by an artist who mastered the subject and made it the obsession of his artistic life. Bright sunlight is reflected from the calm waters beyond her window and the cool white marble, creating a subtle effect of shadow and warmth on the model’s face and neck. These clever effects of light and colour add to the suggestion of Mediterranean sun and it is significant that the picture was painted in Rome.

Pyrallis was painted during the first decade that Godward lived in Rome. He had visited Italy a few times before but in 1912 it seems that he resolved to move permanently to Rome. According to a family story, the move to Rome was due to Godward falling in love with one of the professional models he had met there during previous visits – an affair which shocked his family so deeply that his mother never forgave him. It is not known whether the girl reciprocated his love and she is only known by her soubriquet 'Dolcissima' (The Castaway) but she was undoubtedly the model for a series of depictions of beautiful Roman women painted over several years. She is probably the model for Pyrallis, painted six years after he first met her.

The city of Rome, its gardens, its beautiful women and its tangible link to the ancient world inspired Godward's finest work. In his first year there he painted at least thirteen pictures of Roman models in togas, including some of his most accomplished and ambitious pictures; Reverie (sold in these rooms, 12 June 2003, lot 40), Absence Makes the Heart Grow Fonder (sold in these rooms, 30 March 1994, lot 195), An Offering to Venus (Christie's, London, 13 July 2016, lot 126) and A Tryst (Sotheby's, New York, 8 November 2012, lot 60). In that year the artist William Russell Flint visited the collection of artist studios at Villa Strohl-Fern, close to the entrance to the Gardens of the Villa Borghese, and wrote; ‘[Godward] had one of the finest studios in the Villa Strohl-Fern grounds. It has a wonderful outlook, and among the decorations was a horse’s skull locally supposed to be that of Strohl-Fern himself ‘when young’ The likeness was remarkable.'(ibid Swanson, p.135) The thirty-six studios were set amongst gardens of dappled light and fragrant flowers and the owner's collection of classical antiquities, a haven of solitude for a sensitive artist like Godward who just wanted to spend his days painting. His sister recorded his shyness and commitment to his work; ‘When he [Godward] awoke he immediately began to work and worked all day as long as he could. He just painted pictures all day and hardly came out of his studio. He didn’t do anything else.’ (ibid p.136)

The name Pyrallis appears among the lovers of Gaius Caligula but it is unlikely that Godward’s picture was intended to be a literal portrayal of this Roman woman. It is more likely that the artist intended the name to be a more generic evocation of the ancient past and add to the languid romance of the picture. Godward had used the name of another of Caligula’s lovers for a picture in 1906, Drusilla, and appears to have selected female names almost randomly for his pictures of single figures in Roman dress. In 1918 Godward painted another similar veiled woman as Lycinna (sold in these rooms, 17 December 2009, lot 11). 1918 was a productive year in which he painted fourteen pictures, but they were mostly watercolours or pairs of small oil paintings. This was probably due to the artist convalescing from the ill-effects of the Spanish influenza epidemic which killed millions across Europe. Even amid the turmoil of the epidemic and the horrors of the war which had ravaged the continent, Godward adhered to his formula of painting a Paradise untouched by modernity.