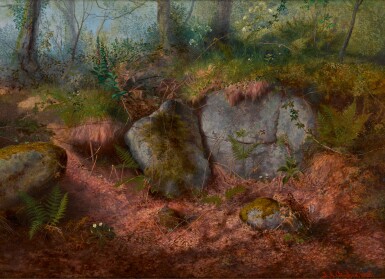 Weetwood Leeds/ J.A. Grimshaw/ August 1st 1861.; bears a further inscription on an old label attached to the reverse: In the Forest (a remarkable nature study in oils/ by JA Grimshaw 1861)

Richard Green, London where purchased by the present owner in 2003

A Mossy Bank is an example of Grimshaw’s work from very early in his artistic career, which he established in Leeds at the start of the 1860s, despite his humble origins and absence of formal training. According to an inscription on the reverse it was made at Weetwood, an area of north-west Leeds. The painting demonstrates Grimshaw’s intense attention to detail, and he renders a wide variety of natural textures and colours with remarkable precision. Such emphasis on painting nature with accuracy was unmistakably inspired by the Pre-Raphaelites and the writings of John Ruskin, who declared in his work Modern Painters (1843) that artists should strive for a ‘bona fide imitation of nature… rejecting nothing, selecting nothing and scorning nothing...’ Grimshaw painted two more works that resemble the present painting; Boulders in Storsforth Wood of 1863 (sold in these rooms, 15 December 2016, lot 13) and A Mossy Glen of 1864 (Bankfield Museum, Halifax. All three works depict moss-covered boulders on a woodland floor and exhibit similar levels of observational detail. Each are evidence of a young, self-taught painter developing his style and technique.

Several artists were well-known in Leeds during the 1850s, including John William Inchbold, who was a personal acquaintance of the Pre-Raphaelites and John Ruskin. It is probable that the aspirational Grimshaw met Inchbold, and the overall treatment of his early paintings certainly bears similarity to Inchbold’s works, such as At Bolton. A Mossy Bank shows Grimshaw at the peak of his Pre-Raphaelite alignment, before he developed the urban night-scenes that defined his later years.