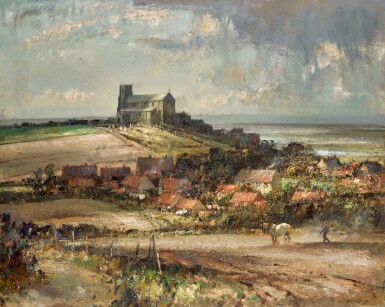 The picture is unlined and in very good condition. There are areas of craquelure but only visible upon close inspection.

There is a small localised area of retouching in the sky to the right of the church and possibly a few other minor retouchings in the sky elsewhere.

The picture is contained in a moulded plaster frame.

Salthouse is a monumental work by Edward Seago, owing to its impressive size and heavily worked paint surface. Executed in the 1940s, the artist was at this stage a master of his craft, and the present work demonstrates his intense response to the landscape before him.

Located on the salt marshes of north Norfolk, the village of Salthouse is referenced in the Domesday book as, its namesake suggests, a house for the storing of salt. On a hill above stands the 15th century St Nicholas’ church. Churches are often found in Seago's work, either as subtle references or providing an interesting focal point through a spire or tower. In the present work, Seago has exaggerated the height of the hill which allows him to accentuate the profile of the church, caught in the half-light, thereby enhancing the sense of drama. Characteristically, the atmosphere of the painting is heightened overall through Seago's dramatic rendering of light and shadow cast by the fleeting weather.

Seago greatly valued the traditions of the land, and his paintings are concerned with the essence of rural England, here symbolised by the ploughman in the foreground, dust rising from the shire horse’s work. In the presence of the 15th century church, it is a scene that has rarely changed over time. In other works, Seago would hint at encroaching modernity through the glimpse of a barge or steam train.

Salthouse is a highly accomplished painting which reveals the influence on Seago of the great landscape painters before him, from Jacob van Ruisdael and the Dutch school of the 17th century, through to the Romanticism of Constable and Turner and to his early mentor, Alfred Munnings. In observing Salthouse, Seago achieves all that he sought to emulate in the work of his artistic heroes.