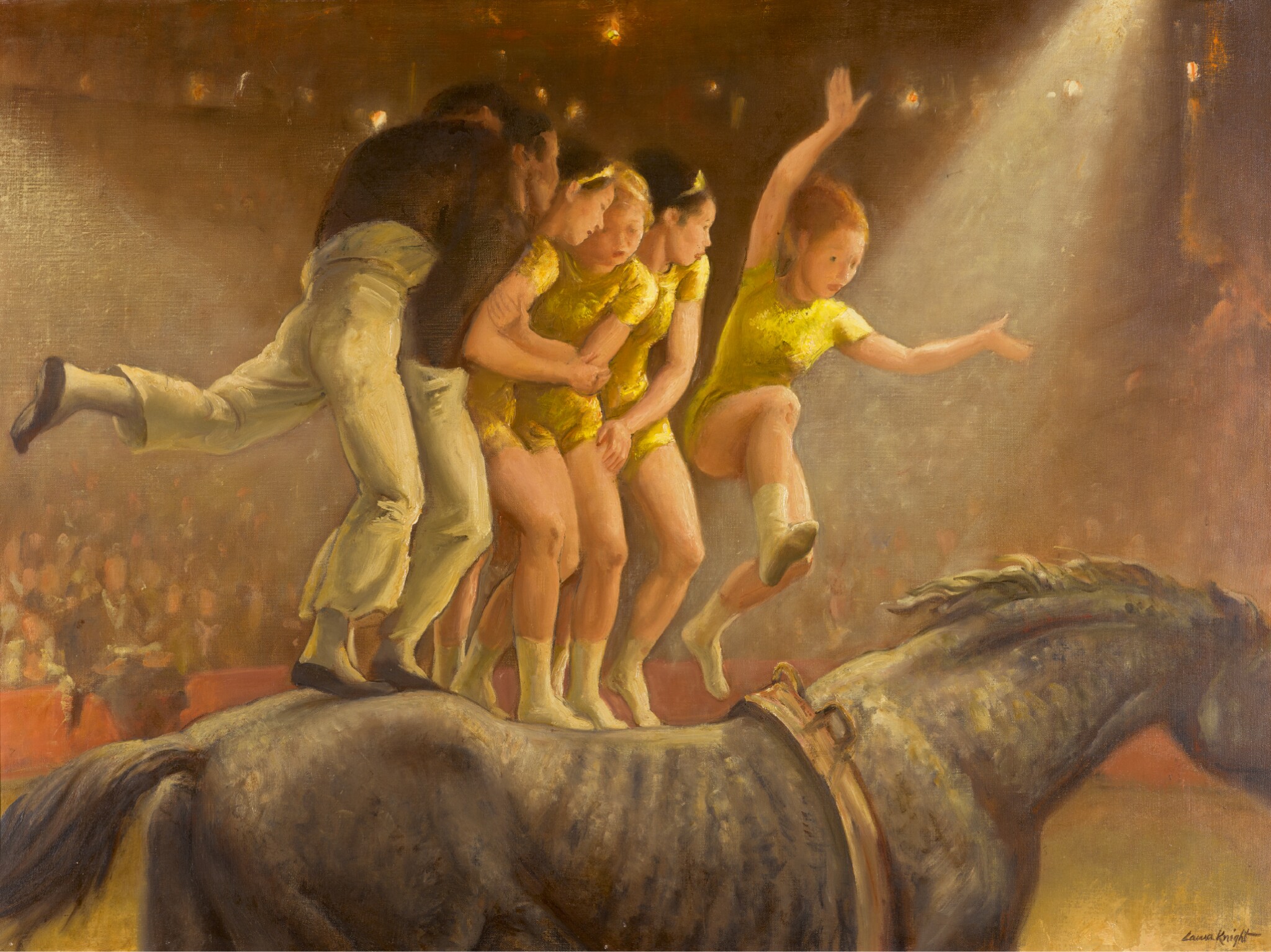 This picture is unlined and in very good condition. There are no signs of craquelure and the paint surface appear to be stable. There is a pinhole in the lower left corner and a minor paint surface abrasion in the top right corner. The picture may benefit from a light clean.

A layer of dirt makes the varnish appear opaque but there do not appear to be any retouchings.

The picture is contained in a simple wooden and gilt frame.

'I have often tried to analyse the circus appeal. It is the display of indomitable courage that one sees and admires, an admiration inherent in the human race'. (Laura Knight, Oil Paint and Grease Paint, Autobiography of Laura Knight, 1936, p.299)

Allez Oop! was painted in 1954 based upon a sketch made almost a quarter of a century earlier in 1930, the same year as Ballet Girl and Dressmaker (sold in these rooms, 12 July 2018, lot 80). Both depict a quartet of female acrobats and two male leaping onto the back of a horse as it gallops around the circus ring amid the glaring lights and amazed crowd. It was a recollection of a scene witnessed many times by Knight at Mills’ and Carmo’s circuses with whom she travelled. Although she had seen a circus at Olympia during the early 1920s she had sat in seats high up at the rear of the audience and it was not until a porter at Paddington station suggested that she go to a ‘real old-fashioned circus’ at the Agricultural Hall at Islington that she became fascinated by the myriad of spectacles that she could observe and sketch. It was Alfred Munnings who took her to Olympia in 1923 or 1924 and introduced her to Captain Bertram Mills who had just started his soon-to-be world-famous circus. Knight and Mills immediately became close friends and he gave her permission to wherever she liked in his circus and to paint what captured her imagination. In the following year she joined the circus of The Great Carmo (Harry Cameron) and was fully immersed into circus life, becoming as much a part of the circus as Togare the lion-tamer, Mary the Elephant, Nina the bucking zebra and an army of clowns, acrobats, jugglers and novelty acts who all seem to have adored her. Her less extrovert husband Harold did not share her enthusiasm but did not prevent her from joining the circus; ‘The circus held my whole interest. I was there all day; I could leave it only to go back to sleep’. (Caroline Fox, Dame Laura Knight, 1988, p.68) During her life-time it was her paintings of the circus for which Knight was best-known by the public.

It was not until she was in her fifties that Laura Knight first painted a horse and she described her excitement at having the opportunity to study particularly beautiful examples; ‘I found a brave opportunity in Carmo’s stable tent – what a joy! Although four-footed, such an animal’s anatomy can be compared with that of the human body, and I did not lose any opportunity to learn all I could about something I had always wished to study. How I loved those beasts.’ (Laura Knight, The Magic of a Line, 1965, p.239) Carmo’s had many fine horses handled by the imminent trainer Emmerich Ankner, including eighteen dove-grey beauties, the finest of which were Heifer and his partner Hassan who led the Liberty Act. There were also eight horses of a particularly rare and beautiful breed named Knapstroper, which originated from the western borders of Russia – so scarce that a friend from the Zoological Society of Edinburgh did not believe that Knight had painted them outside of Russia because ‘“There are no horses of that breed in England”’ (ibid Knight p.240). It is likely that the horse depicted in Allez Oop! Was either Heifer or Hassan whose act was ‘… touring the ring in various manners, dancing, rearing on their hind legs, and goodness knowns what.’ (ibid Knight p.240)