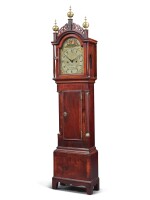 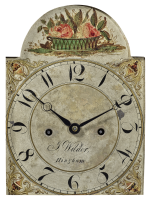 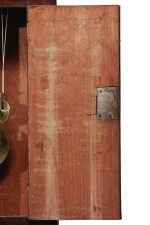 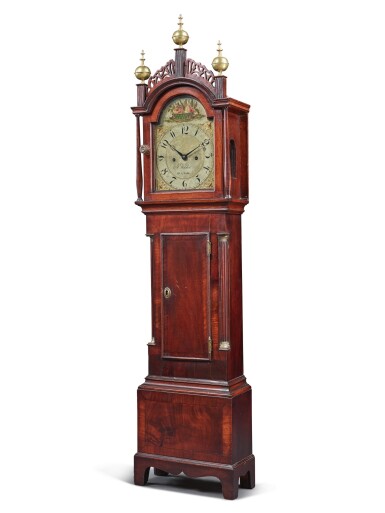 Closely related dwarf clocks made by Joshua Wilder are known. One was sold in these rooms, Highly Important Americana from the Stanley Paul Sax Collection, January 16-17, 1998, sale 7087, lot 359. Another from the Sax Collection appears illustrated in William Distin and Robert Bishop, The American Clock (New York: Crown Publishers, 1983), no. 144, p. 77. Another from the collection of Arthur Wellington of Boston was sold in these rooms, Important Americana, June 17-18, 1997, sale 7010, lot 759. One at Winterthur Museum displays a dial similarly painted with a basket of fruit and shields in the four corners as well as a high style finely crafted veneered case likely made by the same cabinetmaker (see Charles F. Montgomery, American Furniture: The Federal Period (New York, 1966): no. 149, p. 197-8).

The fact that similar painted dials are found on clocks made by Reuben Tower of Hingham indicates that a local painter was supplying decoration to a number of clockmakers working in the area. Joshua Wilder was known to have purchased his cases from Abiel White (1787-1844), who trained under Stephen Badlam (1751-1815) of Dorchester and later worked in Weymouth, a town neighboring Hingham.