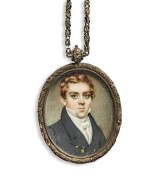 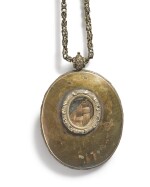 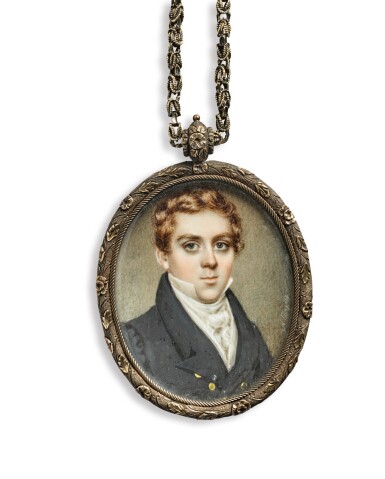 NATHANIEL ROGERS | MINIATURE PORTRAIT OF JOHN WICKHAM WELLS TOGETHER WITH A MINIATURE MOURNING PICTURE IN REMEMBRANCE OF MARY A. WELLS

NATHANIEL ROGERS | MINIATURE PORTRAIT OF JOHN WICKHAM WELLS TOGETHER WITH A MINIATURE MOURNING PICTURE IN REMEMBRANCE OF MARY A. WELLS

MINIATURE PORTRAIT OF JOHN WICKHAM WELLS TOGETHER WITH A MINIATURE MOURNING PICTURE IN REMEMBRANCE OF MARY A. WELLS

the first signed N. Rogers lower right and set in a mourning locket with attached chain and lock of braided hair verso; the second with label on verso inscribed Memorial of Mary Wells 1823 upon her death, done by her husband - she died after child birth.

To request a condition report for this lot, please contact Americana@sothebys.com

John Wickham Wells (1794-1871) was born in New York City to parents Daniel and Julia Knapp Wells. At a young age, he entered the dry goods business and migrated to his father's hometown of Middletown, New York, where he likely met his first wife, Mary Ann Eldred (1801-1823). The two were married for a short three years and only had one surviving child, Mary Ann Wells (1821-1898), before the former died due to childbirth complications in 1823. John Wells later remarried Maria Carpenter in 1831 and is buried in the Wells family plot in the Old Town Cemetery in Newburgh, New York. The miniature portrait on ivory of John Wickham Wells was likely painted by Nathaniel Rogers around the time of the sitter’s marriage in 1820. Nathaniel Rogers is widely acknowledged as one of New York City’s leading early 19th century miniaturists, painting members of some of America’s most elite families at the height of his career between 1815 through the 1830s. The juxtaposition of Wells’ miniature portrait on ivory and the miniature mourning picture he reportedly painted himself three years later, emphasizes the traumatic turn of events that transpired over the course of his late-twenties; the first depicting a handsome and confident young husband of a potentially pregnant wife, rendered in a delicate stipple with advanced modeling and highlighting, while the second reveals a composition of the widowed man weeping into a handkerchief as he leans on the grave of his deceased wife with a child behind him, dominated by the haunted landscape surrounding him portrayed using long, tapering brushstrokes, dark colors, and exaggerated scale.

For more information on the Wells family see Vinnetta Wells Ranke, "The Blackburn Genealogy: With Notes On the Washington Family Through Intermarriage. Containing Historical Facts On Virginia Lore And Mount Vernon, Including Records of Allied Families", (Washington D.C.: 1939), pp. 132-149.