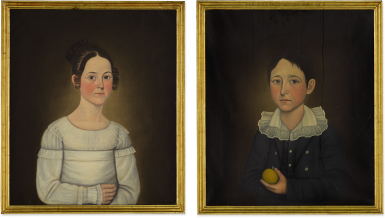 The paintings are both signed and dated on the top stretcher in pencil, respectively John Brewster Jr. pinxt. May 28 1821/11 years old and Painted May 16 1821/9 years 5 months 14 days old/JB. Jr. and on the side stretcher in a later hand. They are further inscribed in pencil on the side stretcher in another hand respectively Junia Loretta Bartlett, who married F.O.J. Smith, Portland Maine and Painted by John Brewster Jr. 1821. Both retain old jelly labels from Nina Fletcher Little.

To request a condition report for this lot, please contact Americana@sothebys.com

The tides of taste turned from full and three-quarter-length portraits to half and bust lengths during the early years of the nineteenth century. Around 1805, John Brewster, Jr., began replacing the older format with the simpler, more abbreviated one illustrated here.

Junia Loretta Bartlett (1810-1849) and Levi Stevens Bartlett (1811-1865) were the daughter and son of Levi (1763-1828) and Abigail (Stevens) Bartlett of Kingston, New Hampshire. Levi and Abigail’s portraits are in the collection of Colonial Williamsburg (acc. nos. 1981.100.1 & 2). Levi was the son of Josiah Bartlett, a physician and the first Governor of New Hampshire as well as a signer of the Declaration of Independence. Levi succeeded his father in the practice of medicine, as did his own son, Levi Stevens. Junia married F.O.J. Smith while Levi Stevens married Caroline E. Sanborn in 1844.

Brewster painted at least five Bartlett family members in 1821, all of which he left unvarnished. Although most painters applied varnish as a final protective coating, some artists and clients preferred the dry, matte appearance and somewhat higher (less reflective) visibility of an uncoated surface.

Nina Little wrote in the Connecticut Historical Society Bulletin "In June of 1821 Brewster visited Kingston, New Hampshire, where he painted Dr. and Mrs. Levi Bartlett and two of their children. These sensitive, unassuming portraits bely the prominence of this illustrious family of which Dr. Levi was a famous physician and his father, the honorable Josiah Bartlett, was a signer of the Declaration of Independence and first governor of the state of New Hampshire." Little further states that "These three Bartlett portraits are unvarnished in fine untouched condition and retain, to an unusual degree, the original clarity and character of Brewster's sensitive portraits."

According to Lottie Bartlett Goodrich, granddaughter of Levi Bartlett, young Levi S. was given the orange included in his portrait to make him sit still while he was being painted.