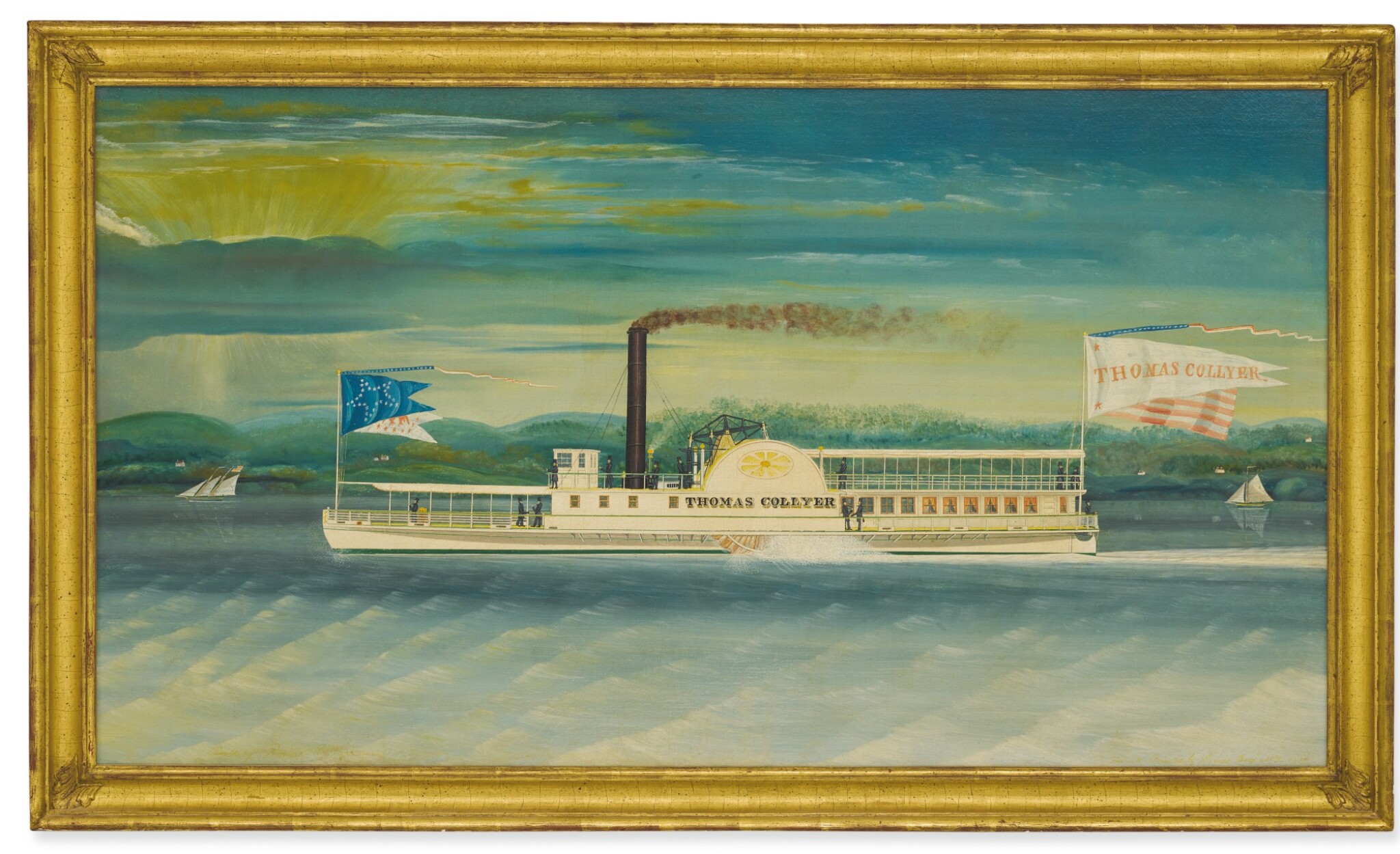 inscribed in yellow paint on the lower left front, built by Thomas Collyer and on the lower right, drawn and painted by J Bard NY 1850.

In excellent condition, the surface of the painting has been lightly cleaned. The gilded frame is from the late nineteenth century.

The first homeport for this vessel was Georgetown, District of Columbia, where it ran on the Chesapeake Bay, as far south as Norfolk, Virginia. In 1886, it was re-named "City of Brunswick" and then operated out of Brunswick, Georgia. It was stricken from the records in 1896, giving it a useful life of almost fifty years. The painting, Thomas Collyer is one of few Bards to show a sunlight effect combined with delicate clouds. A meticulous rendering of the vessel, a typical 1850s bay and river steamer, confirms that the Collyer's were among Bard's most important clients. It is likely that some of the figures shown on deck were the Collyer brothers. The shorter person on the upper deck could be one of the elder children of the Collyer brothers. Although Bard would place adult figures on the decks of his ships, children were almost never shown.

This appears to be the earliest Bard painting of the Thomas Collyer. There is, however, a later Thomas Collyer built in 1862 and probably reflects the fact that the Collyer brothers would sell their vessels, then build a new namesake for purposes of advertising the company name. Another Thomas Collyer was built in 1864, which confirms that vessels with this name were demonstration boats built to high standards and then sold. Thomas Collyer died in 1863, the last vessel named for him could well have been in memoriam.

The twins, James and John Bard were born in New York City on October 4, 1815 on property known as Chelsea Farm and owned by Clement Clark Moore, author of "A Visit From St. Nicholas." The twins moved a few years later and were listed in New York City directories as having grown up on Elm Street. When they were twelve years old, the Bard twins painted their first picture, Bellona, in 1827. By 1836, the brothers had begun to date their work, and in 1838, they were listed in New York City directories as "painters." Working together through the 1830s and at least until 1849, the last year that they jointly signed paintings, the Bard brothers seemed to have had a satisfactory working relationship. John fell upon hard times and never recovered, dying at the age of forty-one in the Alms House Buildings on Blackwell's Island in the East River. James prospered alone, painting many of the important ships then launched, and he maintained and developed a clientele of the most important steamboat operators, both on the Hudson River and Long Island Sound. He painted until his seventy-fifth year when he signed two watercolor portraits of Saugerties, dated 1890.

The largest number of Bard's pre-Civil War commissions are attributable to the Collyer brothers, George, Thomas and William. They launched over 100 barges, lighters, sloops, schooners, yachts and steamboats. They first built at SingSing, New York in 1838, and then, in 1844, at a boatyard at 12th Street on the East River in New York City. More than 30 of the Collyer' s steamboats have survived as Bard portraits. Thomas Collyer died in 1863 and with him the driving force behind the business. With his death an important source of Bard's income was closed forever.