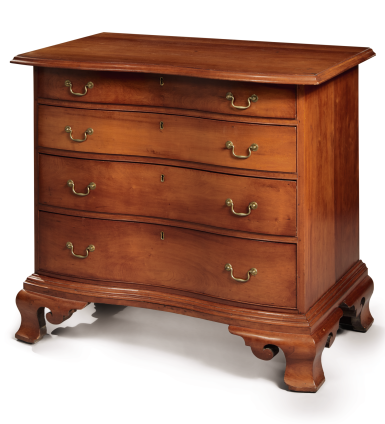 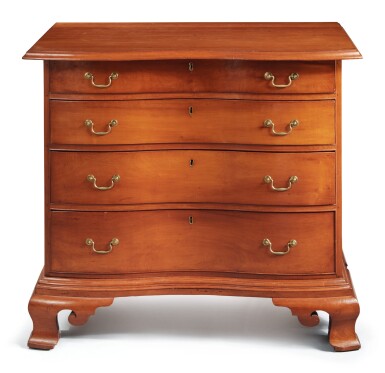 By descent through seven generations of the Peirson family to Margaret Mace Klingman;

Proudly inscribed with the name of its maker – Calvin Willey (1769-post 1831) – and retaining its original openwork brasses, drawer runners and rose head nails, this serpentine chest of drawers is an important document of Connecticut River valley craftsmanship. Although its idiosyncratic design and construction reflect the shop traditions of the Colchester area of Connecticut where Calvin Willey learned his trade, the desk was made after he had completed his apprenticeship and moved to Lenox, Massachusetts, attesting to the geographic spread of popular eighteenth-century furniture styles. The chest was originally owned by Hannah Howell (1757-1822) and Nathan Peirson (1748-1826), a prosperous tanner and tavern keeper, of Richmond, Massachusetts. They purchased it for their country estate, Peirson Place, which was built in Richmond between 1783 and 1790. The house and its contents descended along female lines in their family until May 24, 1997, when their descendant Margaret Mace Klingman (1912-1997) sold it along with four other pieces of furniture attributed to Willey at Robert Herron Auction House in Austerlitz, New York.

Calvin Willey was born on August 8, 1769 in East Haddam, Connecticut the third of eight children of Lemuel (1739-1778) and Susannah (Fuller) Willey. He inherited 9 1/2 pounds and “10 acres and one rood of land” at his father’s death and apprenticed to an unidentified second or third generation Colchester school cabinetmaker. He had apparently moved to Lenox, Massachusetts by 1791, when a deed in East Haddam records “Calvin Willey of Lenox in the County of Berkshire, Massachusetts” selling the land which he had inherited from his father to Ashbel Olmsted of East Haddam, for 26 pounds. He married Lurenia Dimmick about 1793 and their first child was born in Pownal, Vermont in 1794. Their nine other children were born in New Haven, Vermont between 1795 and 1816, and land transactions from 1797 to 1816 and the Census of 1800 through 1830 continue to record him in New Haven. His name does not appear in the Census for 1840 and his date of death is not known.

The Colchester school of cabinetmaking is the focus of Thomas and Alice Kugelman’s article “Furniture in the Colchester, Connecticut style” published in The Magazine Antiques (September 2005): 96-103. They identify four major groups of furniture in this style, including one termed the “Calvin Willey” group that includes several of Willey’s signed case pieces, a majority made during his years in Lenox and none with a history in the town of Colchester itself. Aside from this chest, the only one other piece known with Calvin Willey’s full signature is a desk and bookcase originally owned by Judge William Walker (1751-1831) of Lenox. It was sold in these rooms, Important Americana, January 22, 2006, sale 8158, lot 534

A bonnet-top high chest of drawers also originally owned by Hannah and Nathan Peirson is attributed to Calvin Willey. Inscribed with a “W” on the inside back of the shell drawer, the high chest is currently in a private collection and appears illustrated as pl. IX on p. 102 of the Kugelmans’ article. Two other pieces with a history in the Peirson family are also attributed to Calvin Willey. These include a tall-case clock in a private collection and a desk-and-bookcase in the collection of the Governor’s Residence Conservancy in Hartford, Connecticut (see Thomas P. Kugelman and Alice K. Kugelman with Robert Lionetti, Connecticut Valley Furniture: Eliphalet Chapin and His Contemporaries, 1750-1800, Hartford, 2005, cat. 110b and cat. 110, p. 245-6).