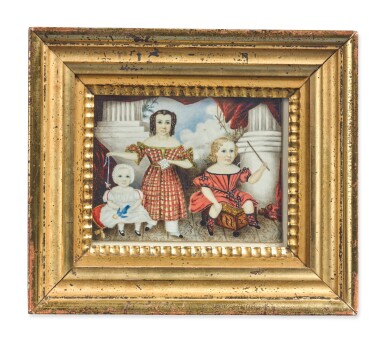 MINIATURE PORTRAIT OF THREE CHILDREN ON A NEOCLASSICAL PATIO

watercolor and oil on ivory

the reverse of the frame inscribed Susan Couch White / Henry.

Please note that Sotheby's has obtained a license from the New York State Department of Environmental Conservation and is authorized to sell this item containing ivory.

In overall very fine condition with no apparent areas of inpainting per examination under ultraviolet light. Minor losses to area of the book held by the central child and to the ribbon hanging from the stick held by the child on the proper left. shows no evidence of any in-painting or other restorations.

This playful and elaborate composition of three children in various poses and fancy dress on a tile patio with Neoclassical columns is one of Clarissa Peters' finest works. Each child is highly individualized. The first from viewer's left in a white lace bonnet and dress holding a doll and seated on a red throw pillow, gazes slightly left with clear blue eyes. It is difficult to identify the gender of this child, given that male and female infants were often dressed similarly before boys were breeched, and the way hair was parted - middle-part for girls and side-part for boys - serves as another indicator of gender that is concealed in this case. In stark contrast, the child's older sister wears a salmon and apple green plaid dress, holding a ribbon tied to a rattle overhead and a small book open in her other hand. She gazes directly at the viewer with enlarged, deep-set, dark brown, almond-shaped eyes - a characteristic that Clarissa Peters is perhaps most famous for - and with matching middle-parted brunette curls. The third sister has blue eyes, similar to the infant’s, while her salmon dress relates to her sister’s but is instead decorated with black bows. Seated on an upholstered box with ball feet, she looks away to her left while holding a stick and ribbon toy over her shoulder. Portraits of children in the late eighteenth century tended to exhibit adult-like tendencies; seen as poised, controlled, and focused. Nevertheless, a cultural shift in parenting practices occurred in the early nineteenth century, which emphasized a gentler outlook on child discipline. Child-rearing manuals guiding parents to foster their children’s potential through play and juvenile literature were also published at this time. These children, who are portrayed in a more natural sense behaving as adolescents do – distracted, playful, relaxed, and showing expressions of unadulterated bliss – and with unique dress, pose, and features in keen detail, suggest that Clarissa Peters viewed these subjects just as adoringly as one would their own, making this portrait miniature a true treasure and all the more in tune with modern sensibilities.