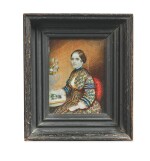 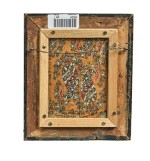 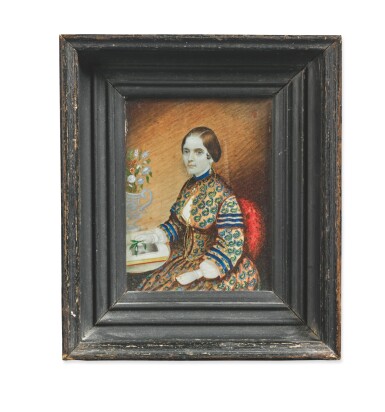 watercolor and gouache on ivory

together with a fragment of 19th century paisley fabric matching the sitter's dress.

Clarissa Peters was born in North Andover, Massachusetts in 1809. The fifth of twelve children, she grew up in a well-to-do family and seemingly lead a happy childhood, provided with ample opportunities for travel and education, presumably attending Franklin Academy, the first school to admit young women and that her younger sister, Emily, also attended. After spending a few years teaching and painting decorative vignettes in Blue Hill, Maine in the early 1830s, by 1835, Clarissa was in Boston and married the miniaturist, Moses B. Russell, who came from Woodstock, New Hampshire, in 1839. She and her husband were active in exhibiting at several Boston art fairs and were recognized for their talents. From 1840 to 1851, they shared a studio at 21 School Street and were very much part of artistic life in Boston.

Clarissa was purportedly taught by her husband on the art of painting miniatures, but it is unknown where or when the couple first met. Nevertheless, it is certain that their careers as miniaturists were intertwined and that they likely worked together on the same portraits in many cases, which has complicated the process of artist attribution. In the following lots containing works by both husband and wife, his influence is palpable in her work; however, his portraits tend to have a certain solemnity and muted pallet whereas hers are imbued with greater adoration of her subjects and contain playful vibrancy and use of props. To add further confusion, Clarissa Peters’ work was also misattributed to folk portraitist Joseph Whiting Stock. While the two were contemporaries working in Massachusetts, and similarly employed vivid colors and props, Stock executed his miniatures in gouache with gum arabic highlights and on much darker backgrounds. Technical attributes aside, the following lots contain classic examples by Mrs. Moses B. Russell (Clarissa Peters) and a style that is indisputably her own.