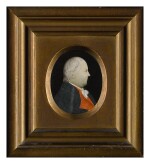 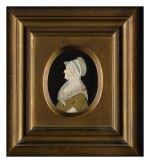 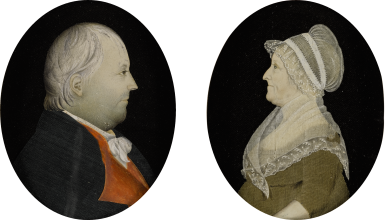 ATTRIBUTED TO MARY B. WAY

These delightful and meticulously crafted miniatures demonstrate the abilities of the self-taught artist Mary Way (1769-1833). Created with painted paper and applied fabrics, these "dressed" miniatures are among an easily recognizable group of thirty-seven known works made by a single individual who was both a painter and seamstress, which were attributed to Mary Way in 1991, after the discovery of a signed example of her cousin, Charles Holt. The daughter of Ebenezer Way (1728-1813) and his first wife, Mary Taber (1737-1771), Mary Way began making these miniatures while in her teens. Her portrait of Polly Carew dating to 1786 or 1787 is thought to be the earliest example and as the date on the Charles Holt portrait indicates, she was still making them in 1800. She first appears in the documentary record in 1809, when she established a school in New London for the teaching of "painting, tambour, embroidery, lace work on muslin, reading, writing, plain sewing, &c, &c." Many of the elite families of her hometown of New London, Connecticut, recognized her talent and commissioned portraits by her. Members from the Huntington, Saltonstall, Sage, Richards, and Coit families all sat for Mary in the late 18th and early 19th centuries. The General Jedediah Huntington (1743-1818) was a prominent patriot in the American Revolutionary War, who grew up with Benedict Arnold in Connecticut and would later face him in battle, and later became a close friend of General Washington’s towards the end of the war. The Huntington family was one of the most affluent in colonial America. His father, Jabez Huntington, owned a fleet of ships trading between Norwich, Connecticut and the Caribbean. And so, it was only appropriate that Jedediah, the eldest son of such an elite family, would go on to marry Faith Trumbull, the daughter of Connecticut Governor, Jonathan Trumbull, in 1766.

Before the war commenced in 1775, Jedediah quickly rose to the rank of colonel over the course of a decade, having first been a leader of the Sons of Liberty in Norwich, an ensign of the first Norwich militia company in 1769, a lieutenant in 1771, and a captain in 1774. As Commander of the 20th Regiment of militia in Norwich, he was alerted by Israel Bissell, who rode all the way from Boston after the battles of Lexington and Concord of the attack.

Sadly, the war had a detrimental psychological effect on Huntington’s wife, Faith, who committed suicide in November of 1775. He faced several hardships during this time, including illness, but continued to fight in several battles. While one of Huntington’s regiments were encamped near Peekskill, New York in 1777, it is believed he met his second wife Ann Moore, daughter of Thomas Moore of New York City. In 1783, Ann asked her husband to return to Norwich in preparation for the winter months, in which Jedediah wrote to General Washington for dispatch. In appreciation, Washington appointed Huntington to be in charge of U.S. Customs at the port of New London. It is there where Jedediah and Ann carried out the rest of their lives and were likely portrayed by Mary B. Way in the last decade of the 18th century.