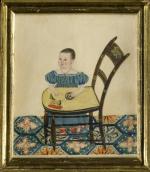 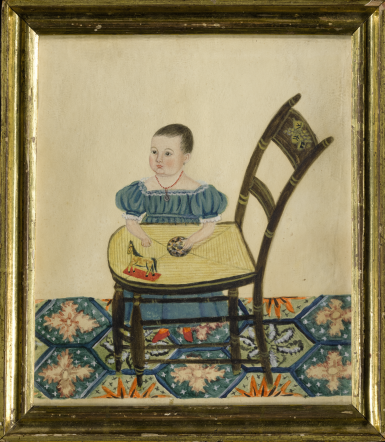 ATTRIBUTED TO SARAH GARDNER | PORTRAIT OF A CHILD IN A BLUE DRESS LEANING ON A FANCY CHAIR, WITH BALL AND HORSE TOY

ATTRIBUTED TO SARAH GARDNER | PORTRAIT OF A CHILD IN A BLUE DRESS LEANING ON A FANCY CHAIR, WITH BALL AND HORSE TOY

PORTRAIT OF A CHILD IN A BLUE DRESS LEANING ON A FANCY CHAIR, WITH BALL AND HORSE TOY

This painting is attributed to Sarah Gardner (1799-1862) of Nantucket, Massachusetts. The painting is in overall very fine condition. Negligible amount of foxing in the proper right mid-ground. Unframed and examined under UV light showed minor inpainting of the bottom of the front chair legs and a faint mark on the background below the crest of the fancy chair. This mark is not perceptible to the naked eye.

Please note that this painting can be attributed to the artist Sarah Gardner (1799-1862) of Nantucket, Massachusetts.

The Gallery at Bristol-Myers Squibb, A Loving Likeness, 1992.

Like many diminutive folk art watercolors of its kind, this portrait of a young boy wearing a blue dress and engine red shoes, with coral beads around his neck (thought to keep diseases at bay) while standing on a brightly patterned rug and holding onto a fancy chair with toys, is a visual feast of both color and pattern, and contains an equally healthy disrespect for the laws of scale and perspective, lending to its playfulness and charm. Nevertheless, this portrait extends beyond the usual delights of this artistic genre, as it introduces a complex concept of time that would later be emphasized in the development of photography. The boy, with delicately swept brown hair, grabs hold of the rush seat on the fancy chair for stability. Still clutching his ball in his left hand, he appears to be reaching for his toy horse resting on his own make-do table but is distracted by an event to his left that the viewer cannot see. The moment of stillness during a toddler's playtime is usually a fleeting one and is easily missed. Much like a candid photograph of a person in action, the capturing of this transitory pause suggests a before, during, and after storyline. His innocent, surprised expression displaying wide eyes and raised brows additionally evokes many questions, as the viewer ponders what the distraction could be, what the boy is thinking, or what will he do next. It is this snapshot of an intimate moment, which in turn reveals the boy's unique, human personality. An extremely similar portrait of Frances Coffin, attributed to the artist Sarah Gardner (1799-1862), is in the collection of Barbara L. Gordon.