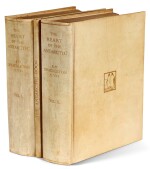 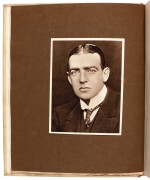 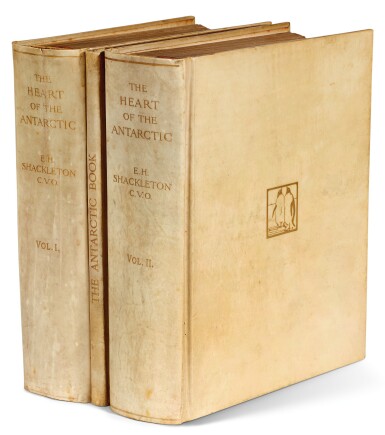 The Heart of the Antarctic. Being the story of the British Antarctic Expedition 1907-1909 [and The Antarctic Book]. London: William Heinemann, 1909

FIRST EDITION, NUMBER 272 OF A LIMITED EDITION OF 300 COPIES, THE ANTARCTIC BOOK SIGNED BY 15 MEMBERS OF THE SHORE PARTY AND MACINTOSH, with the second corrected state of the Antarctic Book, 3 volumes, 4to (268 x 218mm.), 3 folding maps and 1 panorama in the rear cover pocket of volume 2, 214 plates, The Antarctic Book with 4 coloured portraits, 6 engraved sketches, volumes 1 and 2 in original vellum with gilt penguin motifs, volume 3 in original half vellum, top edges gilt, without errata slip, minor scattered spotting, vellum slightly soiled, small tear to spine of volume 1, Antarctic book rubbed

A VERY GOOD COPY of "the most luxurious publication ever to have appeared during the 'heroic age' of Antarctic exploration, recording the exploits of the one British expedition to have been crowned with popular success" (Taurus).

The British Antarctic Expedition successfully made a sledge journey to the south magnetic pole. Other achievements were the ascent and survey of Mount Erebus (12,448 feet), the active volcano on Ross Island in addition to the southern sledge journey, which reached within 100 miles of the south pole.