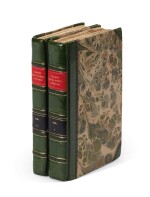 A VERY RARE WORK, not recorded by Blackmer, nor in the Italian Union Catalogue online. Described by Contominas as "surprisingly rare", it has appeared just twice at auction in over 60 years, both copies being imperfect (sales in these rooms 12 October 2000, lot 345, and 7 May 2009, lot 50). The Contominas copy has fewer plates, whilst this copy accords with the one in the British Library.

The Italian artist Simone Pomardi was employed by Edward Dodwell to accompany him on his travels in Greece and make drawings of the antiquities and classical sites. Dodwell produced four hundred drawings and Pomardi six hundred, some of which were used in Dodwell's A Classical and Topographical Tour through Greece (1819, see lot 174). Contominas speculates that "it is possible that Dodwell, whose own travels in Greece were published in London in 1819 and who was resident in Italy, objected to Pomardi's publication and made some attempt to suppress it".