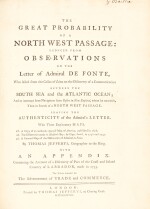 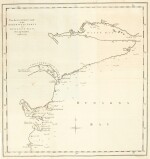 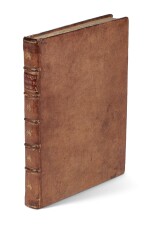 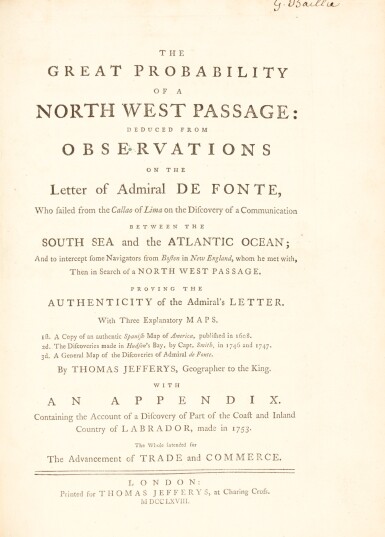 Two works bound in one volume:

Müller, Gerhard Friedrich. Voyages from Asia to America, for completing the discoveries of the north west coast of America. London: Thomas Jefferys, 1761

[Drage, Theodore Swaine] The great probability of a North West Passage: deduced from observations of Admiral de Fonte... With an appendix containing the account of a discovery of part of the coast and inland country of Labrador, made in 1753. London: for Thomas Jefferys, 1768

A FINE COPY. Two companion works published by Jefferys on explorations in the north Pacific. The first is Müller’s account of the discovery of the Bering Strait, edited and enlarged by Jefferys. The second is "An interesting work in the history of the search for the Northwest Passage, discussing the possibility of a passage through to Hudson Bay, or Baffin Bay, via the Strait of Juan de Fuca, or at about the latitude of Queen Charlotte Island." (Hill)

Glyn Williams, in Voyages of Delusion (Yale University Press, 2003, pp.212-4, 266-8), provides evidence that the author of this anonymous work is Theodore Swaine Drage who also wrote the two-volume account of the Smith voyage to the north-west passage in 1749 under the pseudonym Clerk of the California.

Both works are handsomely illustrated with maps by Jefferys.