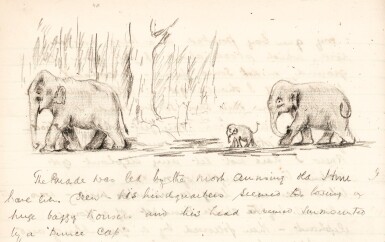 [with:] scrapbook containing photographs, fragments of memoir (typed and autograph), notes for lectures, drawings, and ephemera, altogether 26 items, laid down in a later album with a matching binding

James Howard William (1897-1958) worked in Burma with elephants for over 20 years, and became famous as "Elephant Bill" for his crucial assistance to the XIVth British Army in Burma during World War II. He published a number of books in the last decade of his life, but - as these notes reveal - had been writing since his first years in Burma. Some of the incidents described in this early manuscript relate to his work overseeing working elephants in Burma's teak forests, such as tracking and shooting rogue elephants. Others, such as his account of a family of panthers killed by a tiger, come from his close observation and knowledge of the natural world around him, whilst others are anecdotes of hunting for sport.