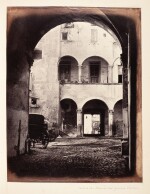 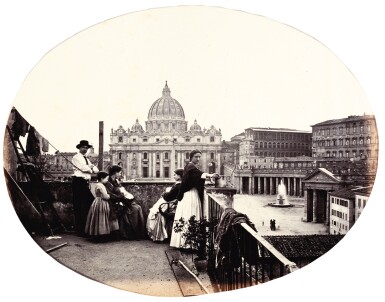 7 albums, comprising 6 volumes 4to (310 x 230mm.), and one folio (465 x 370mm.), over 450 ALBUMEN PRINTS (average 245 x 180mm., or the reverse; some larger: 280 x 350mm., or the reverse, and some small) by Robert Rive, De Bonis, C. Naya. Moritz Lotze and others, mounted on card or paper, mostly recto, some recto and verso, nearly all with neat pencil captions on the mounts, plus a few loose unmounted photographs, contemporary vellum, flat spines gilt, each volume titled and numbered on the spine in gilt, some images faded, some spotting and dust-staining, the mounts in the folio volume separating, some stains to bindings

Hare was born in Rome and educated at Harrow and Oxford, he became a prodigious author of biographies and travel guides, including some for John Murray, and others written in his own name, including Walks in Rome, Walks in London, Wanderings in Spain, and Cities of Northern and Central Italy. Hare was also a competent watercolourist and his work was exhibited in London in 1902. The photographs include buildings, landscapes, street scenes, architectural studies and details, paintings and classical sculpture. Nearly all the photographs were acquired from professional photographers, but some smaller photographs may have been taken by Hare.

Please note there is provenance to add to that stated in the printed catalogue: these albums were acquired by the art historian Kenneth Clark from the estate of Sir Philip Sasssoon, and were purchased by the present private collector directly from Lord Clark's family in 1983 and the larger album in 2018