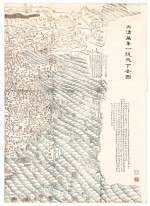 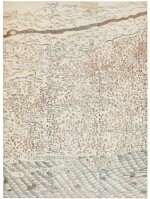 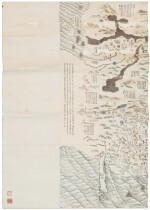 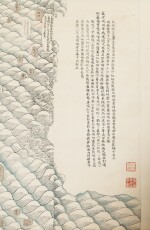 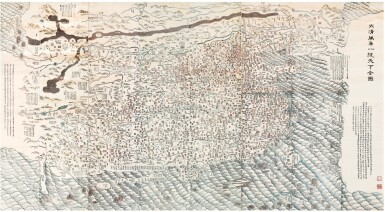 The preface consists of 268 Chinese characters, together with a variety of cartographic symbols or shapes denoting administrative divisions of the Qing empire. The majority of the text is identical to that which appears on later versions of the Blue Map, however the ending (and obviously date), are different.

The preface may be translated as follows: 'The territory of our country has never been as large as during the Great Qing dynasty. The conquered territory is so large that it would be very difficult to measure it accurately. In addition, numerous envoys and officers from different countries travel a long way to declare themselves vassals and pay tribute to our emperor with the help of translators.

During the Ding Hai year (丁亥) of emperor Qianlong [1767] Huang Qianren (黃千人)from Yuyao (餘姚) drew a map [of the empire]. On this map, rivers, mountains, borders and cities are scattered all over and clearly presented. It is well worth reading. We can see the vast territory of our country in a flourishing age. It can be used as a scale to calculate distance. Nevertheless, at that time in Jinchuan [present day Sichuan province], Tibet and Xinjiang, cities were not yet established. Furthermore, some rivers and seaports are omitted from the map. On this re-engraved map, all these missing parts are made up conforming to the official books. It is definitely clearer and contains more details than the map of 1767.

On the whole map, within every one hundred square Li (1 Li, 1里 = 567 m), 省 (Sheng, provinces) are illustrated by the sign日, 府 (Fu, large cities) are shown by the sign 口, other administrative units : 廳 (Ting), 直隸州 (Zhi Li Zhou, cities directly under the provincial authority), 州 (Zhou, cities) 縣 (Xian, counties ), 關 (Guan, strategic passes), 營鎮 (Ying Zhen), 土司 (Tu Si, ethnic minority officials) are represented by different types of signs [rectangles, circles, triangles, etc.]. As for those remote and endless frontier areas, it would be difficult to calculate accurately in Li [distance unit], as well as for the islands on the sea due to unpredictable wind. Therefore, I just recorded their directions on the map. I drew these areas on the basis of the 1767 map without daring to make any change.

The 1767 map was engraved on a board. [Technically] it was difficult to reach high definition, but also it was not easy to carry it. Therefore, I engraved my map on a foldable panel. It seems that it would be more convenient for travellers to install the map in a bookcase. In case, later a knowledgeable and virtuous cartographer who understands my earnest heart and endeavor would be able to revise my map and improve it, to make it perfect, I would be more than happy.