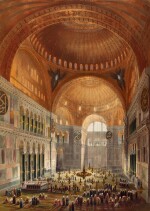 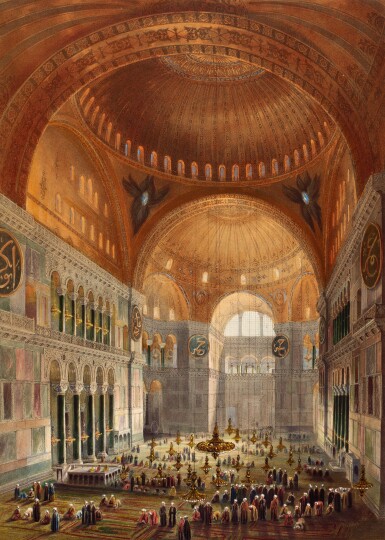 THE RARE DELUXE ISSUE, WITH HAND-COLOURED PLATES MOUNTED ON CARD. Four of the plates, if joined, provide a magnificent roof-top panorama of Constantinople.

Court architect to the Russian royal family, Fossati travelled to Constantinople in 1837 to work on the building for the Russian Embassy. He completed the project in 1845 and entered the service of the Porte, designing the archives building, the telegraph-office, the hospital of the Ministry of War, as well as churches and private villas. In 1847, he was charged with the restoration of Hagia Sophia: this took two years and involved the removal of buttresses which had been added to protect the structure and the uncovering of valuable mosaics. The mosaics were subsequently covered up and are not illustrated in the present work. Fossati intended to publish a separate work on the mosaics, but this never materialised.