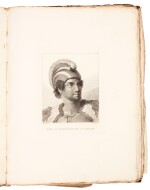 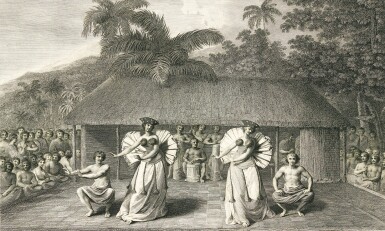 Complete set of the voyages, comprising:

[FIRST VOYAGE] John Hawkesworth. An Account of the Voyages by the order of his present Majesty for making discoveries in the Southern Hemisphere, and successively performed by Commodore Byron, Captain Wallis, Captain Carteret and Captain Cook, in the Dolphin, the Swallow, and the Endeavour. London: Printed for W. Strahan and T. Cadell, 1773, FIRST EDITION, 3 volumes, 52 engraved plates, charts and maps (most folding or double-page, including "A Chart of the Straights of Magellan"), [Beddie, BCJC 648; Hill (2004) 782; Sabin 30934]

[THIRD VOYAGE] James Cook and Captain James King. A Voyage to the Pacific Ocean... for making Discoveries in the Northern Hemisphere. London: Printed for G. Nicol and T. Cadell, 1785, second edition, 3 volumes text and atlas, together 4 volumes, text with 24 engraved charts and plates (some folding), folding printed table, with 8pp. "A Defence of the arguments advanced, in the introduction to Captain Cook's last voyage, against the existence of Cape Circumcision" by William Wales at end of volume 3, atlas with 2 folding maps, and 56 plates (only of 61, some folding), [Beddie, BCJC 1552; cf. Hill (2004) 361; Sabin 16250], without advert leaf at end of volume 3, minor browning, atlas volume mostly disbound