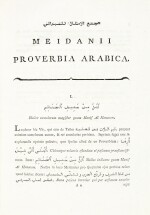 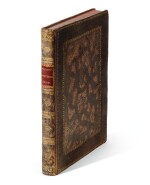 A collection of 454 Arabic proverbs by the twelfth-century Iranian al-Maydani, with Latin translation and commentary. Schultens was professor of Oriental languages at Leiden and Amsterdam, and while studying at Oxford in the 1770s, he copied Edward Pococke's manuscript of this work (Schultens's manuscript is now in Leiden University Library). He died in 1793 and his papers were put up for auction by his widow with the Leiden bookseller and publisher Honkoop in 1794, but the uncertain military situation at the time prevented the auction from taking place.

A. Vrolijk, "'A sublime treasure of pretious manuscripts': the Schultens's legacy in the Leiden University Library and the elusive purchase of 1806", Journal of the Royal Asiatic Society 19 (2009), 281-292, appendix II, no.5