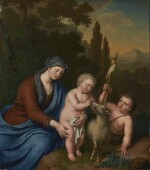 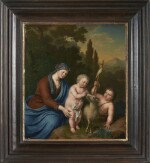 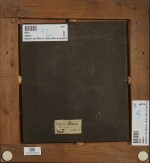 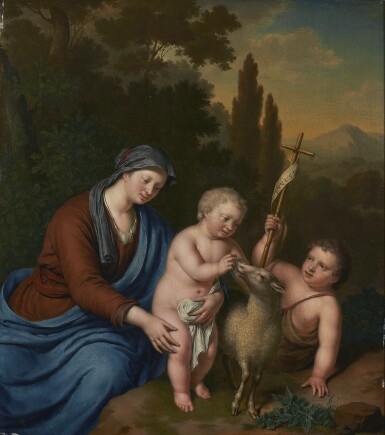 The bevelled panel is uncradled, flat and stable. The paint surface is clean and the varnish sightly discoloured. There is some very minor frame abrasion. Inspection under ultraviolet light reveals very little retouching: along the lower and left edges, and surrounding the Christ child's head; but the work appears in overall very good condition.

By inheritance to the Earl of Brownlow, Belton House, Lincolnshire, 1805;

Willem van Mieris was the son of Frans van Mieris the Elder, the leading member of the family of artists working in Leiden. Leiden was the centre of the fijnschilder tradition of painting, developed by Gerard Dou, and practised by artists including Van Mieris, Gabriel Metsu and Godfried Schalcken. Fijnschilder - literally ‘fine painting’ - is the term that, in the 19th century, came to define these meticulously-executed paintings with their exquisite details and smooth surfaces, typically painted on a small scale, with some features purportedly executed with brushes made from a single hair.

Willem produced paintings in a wide range of subjects: historical, religious, mythological, portraiture, landscapes, and genre scenes, the last of which make up the majority of his œuvre, and as such the present subject is relatively rare.