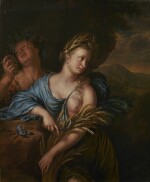 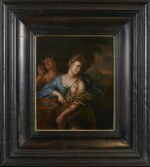 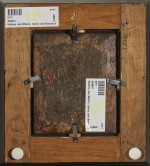 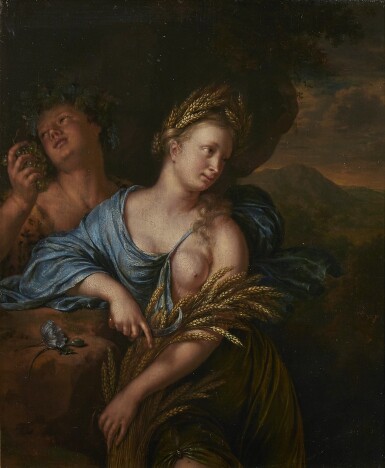 The bevelled panel is uncradled, flat and stable. The paint surface is mostly clean and the varnish clear and even. The craquelure of Ceres' blue cloak is slightly more pronounced. Inspection under ultraviolet light reveals a thick varnish under which some small retouchings are visible along the edges and in the dark pigments upper left, but the work appears in otherwise good condition.

Until the sale in 1801, this painting was always sold (as consecutive lots) along with a pendant depicting Flora with a Shepherd. That painting was sold London, Sotheby's, 5 July 1995, lot 96, when the present works whereabouts was described as having been last known in 1917.

Willem van Mieris was the son of Frans van Mieris the Elder, the leading member of the family of artists working in Leiden. Leiden was the centre of the fijnschilder tradition of painting, developed by Gerard Dou, and practised by artists including Van Mieris, Gabriel Metsu and Godfried Schalcken. Fijnschilder - literally ‘fine painting’ - is the term that, in the 19th century, came to define these meticulously-executed paintings with their exquisite details and smooth surfaces, typically painted on a small scale, with some features purportedly executed with brushes made from a single hair.

The favoured subjects of these artists were generally genre scenes, depicting so-called everyday activities or characters. Having trained in his father’s workshop, Willem van Mieris, a member of the third generation of Leiden school painters, treated a wider range of subjects and was particularly interested in the idealisation of the female nude, following his study of classical sculpture. This preoccupation is clearly reflected here in the elegant figure of Ceres.