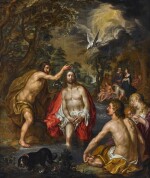 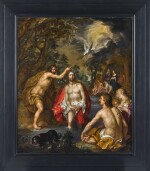 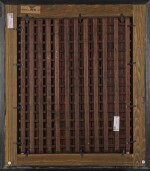 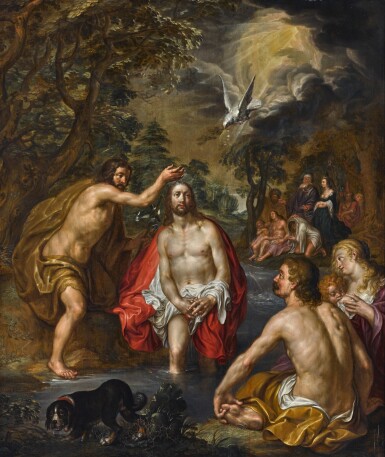 JACOB LOIS | THE BAPTISM OF CHRIST

JACOB LOIS | THE BAPTISM OF CHRIST

THE BAPTISM OF CHRIST

The panel is cradled, flat and stable. The paint surface is clean with a clear and even varnish. There is a very faint surface crack with tiny associated losses starting at the lower margin, just right of centre, that runs half way up the panel. Further faint surface cracks in the lower right corner are approx. 10 cm. long. There are discoloured vertical lines of retouching which run the height of the panel presumably along panel joins; one 10 inches from the left margin, and the other just right of centre. Inspection under UV light confirms the aforementioned lines of restoration and reveals further retouchings; fine vertical lines throughout the sky and figures flesh tones, all presumably to minimilise the effect of the panel grain. More concentrated retouchings are in the trees and sky, centre right, and an area in the water below Christ, approx. 10 x 7 cm., as well as spot retouching scattered throughout.

In overall fair condition with the colours well preserved.

Jacob Lois appears to have been a man of diverse talents. Apparently a lifelong citizen of Rotterdam, he is known to have been a merchant, painter, draughtsman, engraver, architect, historian, collector, and he co-owned two dying business with his brother, Samuel, as well as holding a number of public offices, including captain of the local militia.

Lois is known through very few paintings, two of which - including the present lot - are in the SØR Rusche Collection (the other painting, Portrait of a woman with a book, will be offered in September). A pair of portraits, signed and dated 1645, in which the sitters are dressed as a shepherd and shepherdess, are in the Schielandshuis, Rotterdam.[1]

The reverse of this panel is stamped twice with the mark of a panel maker who is yet to be identified. He is known to have been active in the Rotterdam and Delft areas during the second and third quarters of the 17th century. The same mark has been found on panels used by Anthonie Palamedesz. (1601-73)[2], Herman Saftleven (1601-81),[3] and on the reverse of the marine painting by Justus de Verwer, offered in this sale (lot 20).