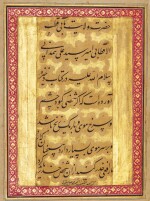 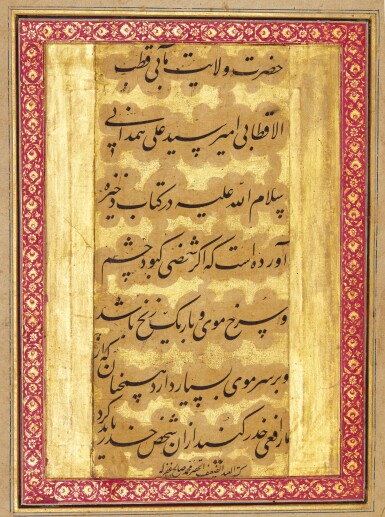 each album page with one European print on the recto, the reverse with a calligraphic panel in black nasta’liq within clouds against a gold ground within a red and gold border

Each side with some losses to the illumination and rubbing to the ink, some staining and smudges, as viewed.

The two engravings are after designs by the Flemish designer and engraver Adriaen Collart (d.1618), active in Antwerp and renowned for both his designs as well as his reproduction of famous masters. Engravings by Adrien Collaert were praised at the Mughal court and some were used as models for paintings later included in the St. Petersburg Muraqqa'. We know that a Bible with no less than a hundred and fifty-three engravings by the best artists of Antwerp reached India after 1595 and inspired the artists at the Mughal court (see, for example, an illustration which is a hybridisation of two engraved illustrations by Collaert from Jerome Nadal’s Evangelicae Historiae Imagines included in the St. Petersburg Album (published in Von Hasburg 1996, p.80)). The reverse of each folio bears a calligraphic exercise signed by Muhammad Salih.

Muhammad Salih may be identified with the calligrapher from Isfahan, whose recorded works are dated between 1092 AH/1681-82 AD and 1123 AH/1711-12 AD, including inscriptions on monuments in Isfahan. Nothing is known about his life other than what he mentioned in his colophons, i.e. that he was a son of the calligrapher Abu Turab, and that he must have travelled to Syria as one of his calligraphic pages was copied in Aleppo. Bayani dismisses what is written in one of the tadhkirahs that he was a pupil of Mir ‘Imad (d.1615-16) and that he was sent to India by Shah ‘Abbas (d.1628-29 AD) (M.Bayani, ahval va athar-e khosh-navisan, vol.iii, 1348sh, pp.767-774). None of his works are signed in the way these two calligraphies are, so the attribution is not a certainty.