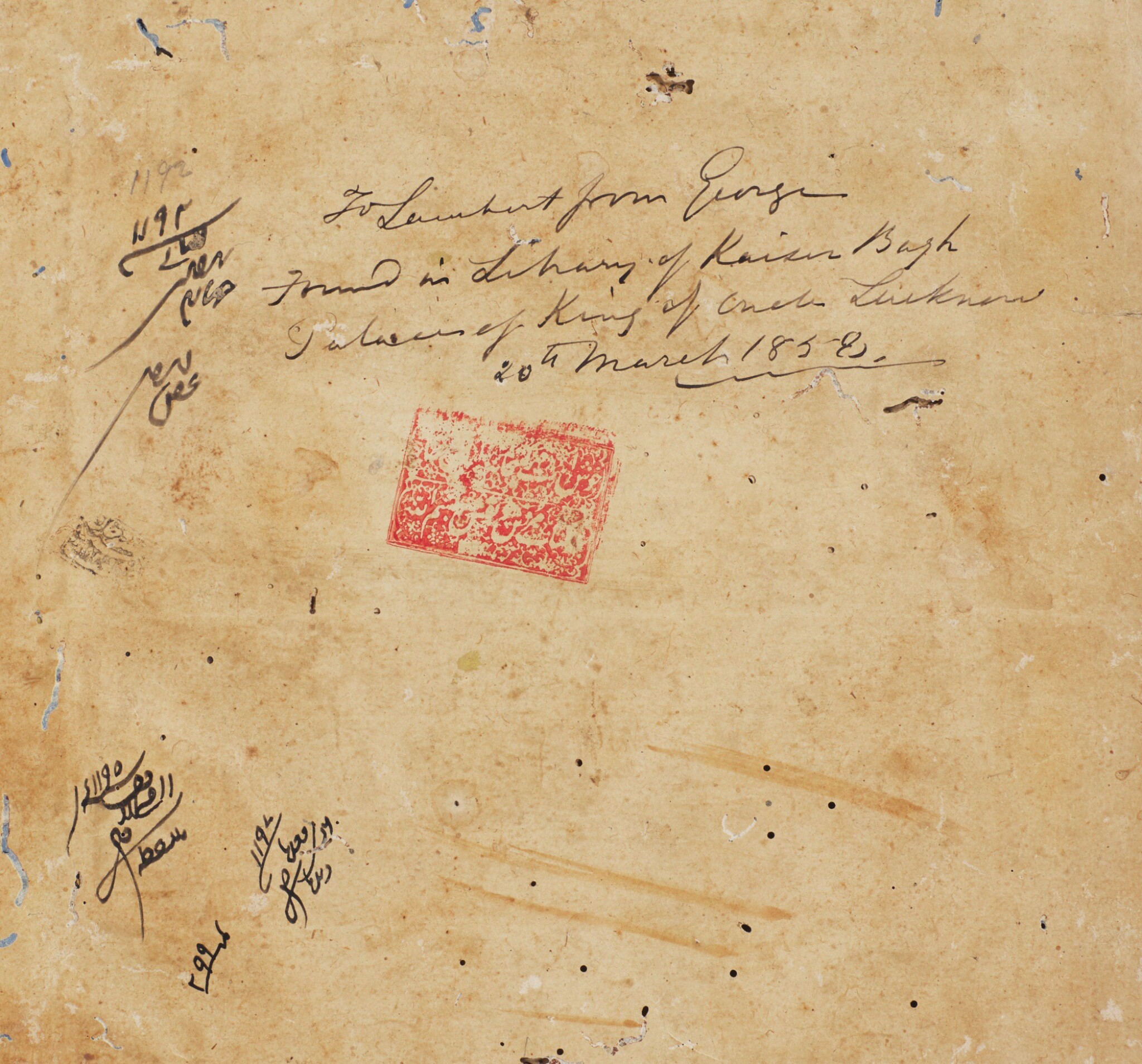 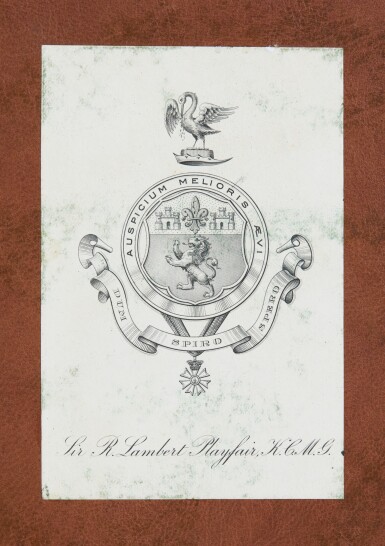 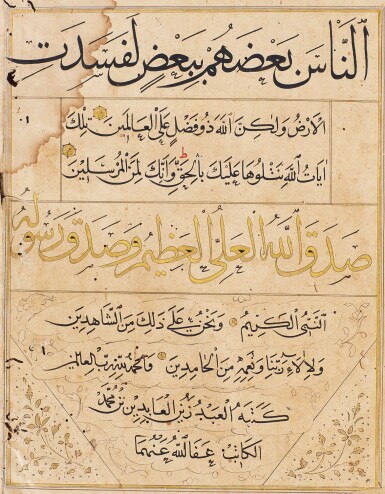 Arabic manuscript on paper, 23 leaves plus 2 fly-leaves, 7 lines to the page, the first and seventh line in black muhaqqaq, the fourth line in gold thuluth and the remaining lines in black naskh, ruled in gold and black, verses separated by gold and blue rosettes, polychrome and gold teardrop marginal verse markers, f.1b and f.2a with an illuminated frontispiece, in brown stamped leather binding with a central almond-shaped medallion

The margins have been cropped and the pages have been consolidated and restored, various stains and traces of dump, some rubbing and smudges, minor holes, the opening bifolio in overall good condition, some areas of the paper restored, smudging and losses to the ink and gold, the associated binding restored and with minor scratches, as viewed.

An inscription in English on f.2a reads: ‘To Lambert from George, found in Library of Kaiser Bagh Palace of the King of Oudh Lucknow, 20th March 1858'

This juz comes from a fine Royal Qur’an dedicated to the Aqqoyunlu ruler Ya’qub Beg (r.1478-90), and represents one of the finest examples of the juxtaposition of different styles of calligraphy, where the scribe Zayn al-‘Abidin has alternated his use of muhaqqaq, thuluth and naskh, in a fine exercise of balance and elegance.

The mixture of different calligraphic styles within the same text is called juxtaposition. This practice, sporadically used in the twelfth century, became much more common in the fourteenth and fifteenth centuries, especially in Central Asian. Zayn al-‘Abidin b. Muhammad al-Katib al-Shirazi was undoubtably a master of this technique and in the different volumes of this Qur’an, he tries to alternate between as many of the 'Six Pens' as possible. The partly legible inscription on f.1a mentions a dedication to the Aqqoyunlu ruler Ya’qub ibn Uzun Hasan Abu’-Fath (r.1478-90).

The Aqqoyunlu rose to power in the middle of the fourteenth century in the region of Eastern Anatolia and Azerbaijan. They submitted to Timur and fought on his behalf against the Ottoman empire and Bayazid I. Uzun Hasan (r.1457-78), the father of the ruler to whom this Qur’an juz is dedicated, was a brilliant military commander who pioneered the expansions East, defeating the Qara Qoyunlu and extending the empire up to Khurasan and Iraq. Uzun died in 1478 and was succeeded for a brief period by Sultan Khalil and then Ya’qub. Under Ya’qub's twelve-year rule, the Aqqoyunlu kingdom enjoyed a period of relative calm. They fought briefly against the Ottomans in 1479 and the Mamluks in 1480. But Ya’qub’s biggest problems were domestic with frictions stemming from the Safawiya order guided by Shaikh Haydar, as well as protests regarding a tax reform unpopular with the clerics.

Zayn al-‘Abidin b. Muhammad al-Katib al-Shirazi, scribe of the current juz, was a prolific artist. Along with the current Qur’an, he also completed a single-volume Qur’an (dated 876 AH/1471 AD) copied for the Royal Library of Abu’l-Fath Muzaffar al-Din Hasan Bahadur Khan, which must be Uzun Hasan (A. Golchin-Ma’ani, rahnama-ye ganjineh-ye qur’an, Mashhad 1347sh, cat.no. 64, pp.147-9). He was also a teacher of calligraphy (a copy of Rumi’s Mathnavi dated 869 AH/1464-65 AD is in fact signed Ahmad al-Katib al-Shirazi, student of Zayn al-‘Abidin b. Muhammad al-Katib, see Christie’s London, 21 April 2016, lot 80).

Other recorded sections of this Qur’an:

Two ajza' (numbers unknown) recorded as being in the Mashhad Shrine Library and published in Faza’ili (atlas-e khatt, Isfahan, 1391, pp.334-5).

Two ajza (the number is not known) recorded as being in the Mashhad Shrine Library and published in Faza’ili (atlas-e khatt, Isfahan, 1391, pp.334-5).