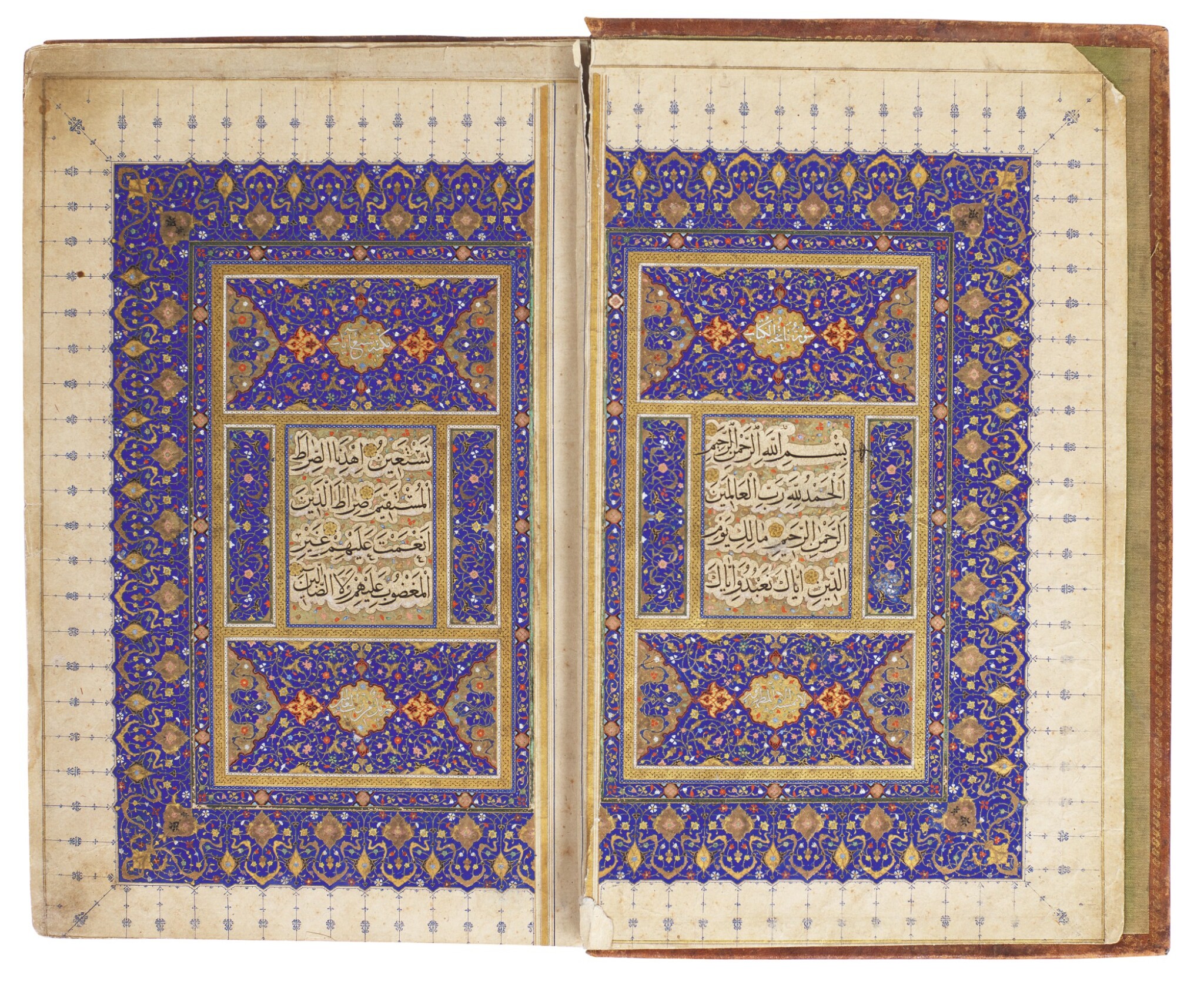 The margins clean, the illumination of the incipit possibly with some repainitng to the blue, a tear running on the right hand side border, which is stll attached but quite fragile, some rubbing and flaking, as viewed.

This is a fine Safavid Qur’an from the first half of the sixteenth century. Although an illuminated panel at the end of the Qur’an mentions the date 842 AH (1438 AD), the text and certainly the illumination are surely a century later. The decoration of the illuminated frontispiece is very similar to that found in a Qur’an now in the Topkapi Palace Library, dated 921 AH/1516 AD (inv.no. TIEM232, published in Farhad & Rettig 2016, n.42, p.266). In both manuscripts the text is framed by clouds and written against a gold ground decorated by polychrome interlacing flowers. The borders are lavishly decorated with gold scrolls against a cobalt blue ground.

The text was probably written first and illuminated some decades later. There are no traces of the mistar and the ten lines of fine elongated naskh are balanced, with less than a centimetre between two lines. At some point an interlinear Persian translation written in red nasta’liq was added below each naskh line. This was later rubbed off and some pages have been illuminated with gold.

The marginal notes are on benefits of reciting each chapter and are all quoted from Shi’a Imams, probably added later when the manuscript reached the Deccan. F.432b bears several ownership notes and seals. One of the notes records that the Qur’an was in a library by 9 jumadi II 1018 AH (9 September 1609 AD), and a stamp of a later owner named Muhammad Muhsin Khan is impressed over it.

Two other Indian seal impressions give the names of Sadiq Khan Niknam and Muhiyy al-Din ‘Ali Khan. Sadiq Khan Niknam, also known as Shams al-Dawlah Lutfullah Khan Mutahawwir Jang (d.1752) was an important historical figure of the Deccan. He came to the court of Shah ‘Alam I Bahadur (r.1707-12) and rose to the rank of Amir. He then joined Farrukh-Siyar (r.1713-19) and was appointed to administer the capital. He was made Khan-e saman under Muhammad Shah (r.1719-48) and given the title Shams al-Dawlah Lutfullah Khan Mutahawwir Jang. The seals present on this manuscript give the dates ‘9 Rabi’ I, [regnal] year 9’ (which corresponds to 25 October 1727 AD); ‘14 regnal year’ (1732-33 AD) and ‘26 regnal year’ (1744-45 AD). As none bears the name of an emperor, the Qur’an may have been in his private library.