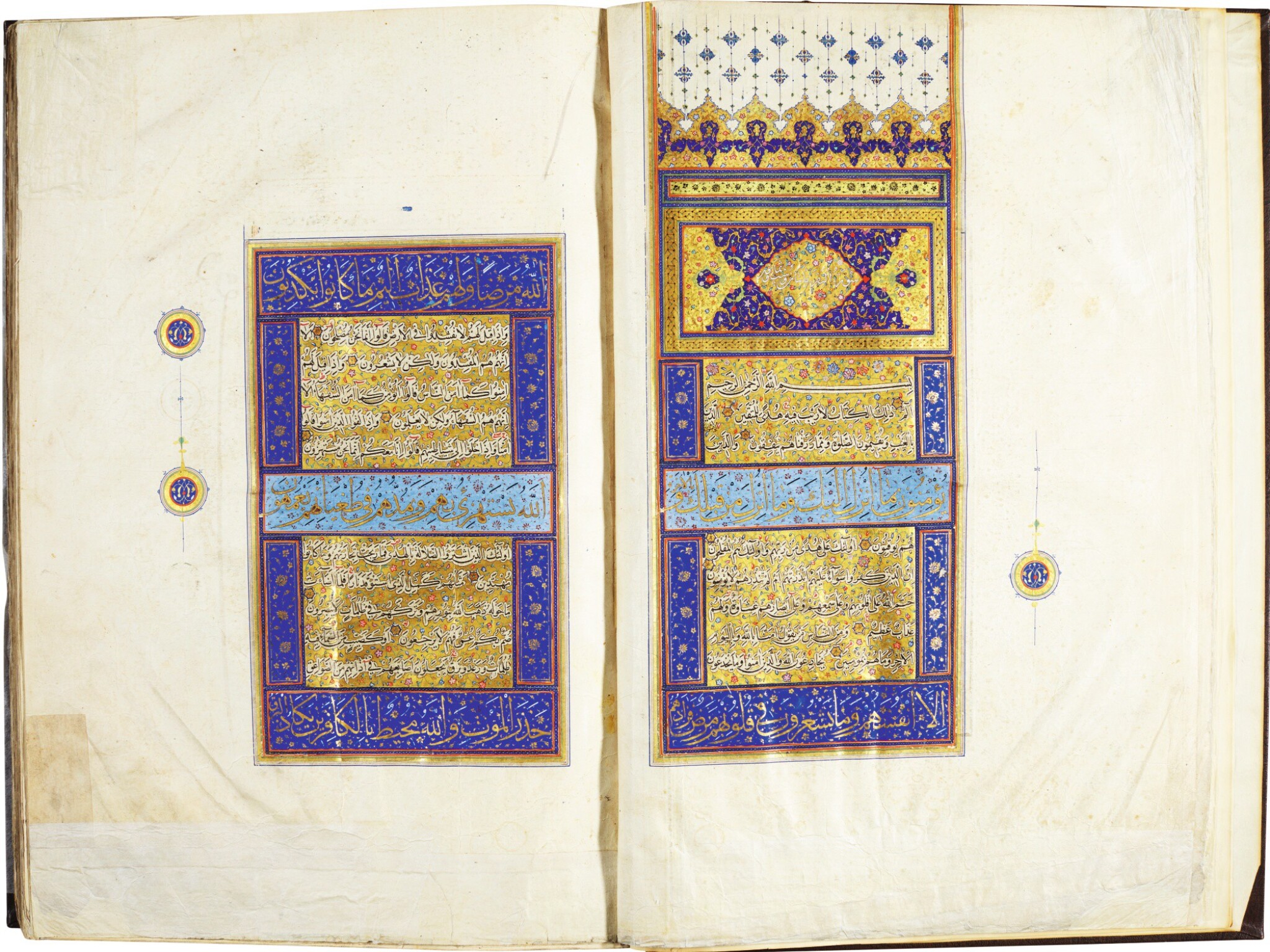 The manuscript has been rebound in a modern leather binding, the margins are clean with only minor stains, minor losses and smudges to the illumination, minor stains throughout, loss of a panel of the falnama at the end, the last leaves have been misbound, some ownership inscriptions and ex libris, as viewed.

This superb and finely illuminated Qur'an has all the hallmarks of the most refined manuscripts of the Safavid period. Noteworthy characteristics include the text written in a variety of scripts and colours, lavish illumination and its impressive size, as it seems that the margins have not been trimmed since its original production.

One of the most striking aspects of this magnificent manuscript is its size which appears not to have been cropped (even if the original binding has since been replaced). This renders it one of the largest Safavid Qur’ans to have survived today (for a comprehensive list of comparable Qur’ans produced in Shiraz in the first half of the sixteenth century and their measurements, see Wright 2018, pp.294-300).

The illumination of the manuscript is of a style associated with early Safavid manuscript production and the output of Shiraz in the first half of the sixteenth century. The first bifolium bears two fine gold shamsas with verse 88 from surah al-Isra (XVII): “If mankind and the jinn gathered in order to produce the like of this Qur'an, they could not produce the like of it, even if they were to each other assistants.” This is then followed by surah al-Fatihah (I) written within two gold 12-pointed stars, surrounded by dense floral scrolls and interlacing palmettes on a deep blue ground. The beginning of surah al-Baqarah (II) follows in the next bifolium, written within clouds and against a floral gold ground.

The manuscript has been lavishly and consistently illuminated throughout, with the surah headings executed in different colours. As noted by Elaine Wright, "this [Qur’an] appears to be an unusually fine manuscript and one in which the illuminations can withstand the close scrutiny that few other manuscripts of the time can.” (Wright 2018, p.296). The falnama bears also a colophon naming Jalal Bakalnajar, who was likely only responsible for the falnama rather than the whole Qur’an.

Qur’ans produced in the first half of the sixteenth century are rarely signed or dated and very few illuminators are known from the period (for an extensive discussion on the illuminators recorded see James 1992, p.144), but the refinement of this Qur’an, its impressive size and balanced and elegant hand all lead to the hypothesis that it was a royal patronage or a noble commission. With the addition of fine condition, and a distinguished provenance and exhibition history stretching back to the early twentieth century, this manuscript represents one of the finest Qur'ans to have been offered at auction in decades.