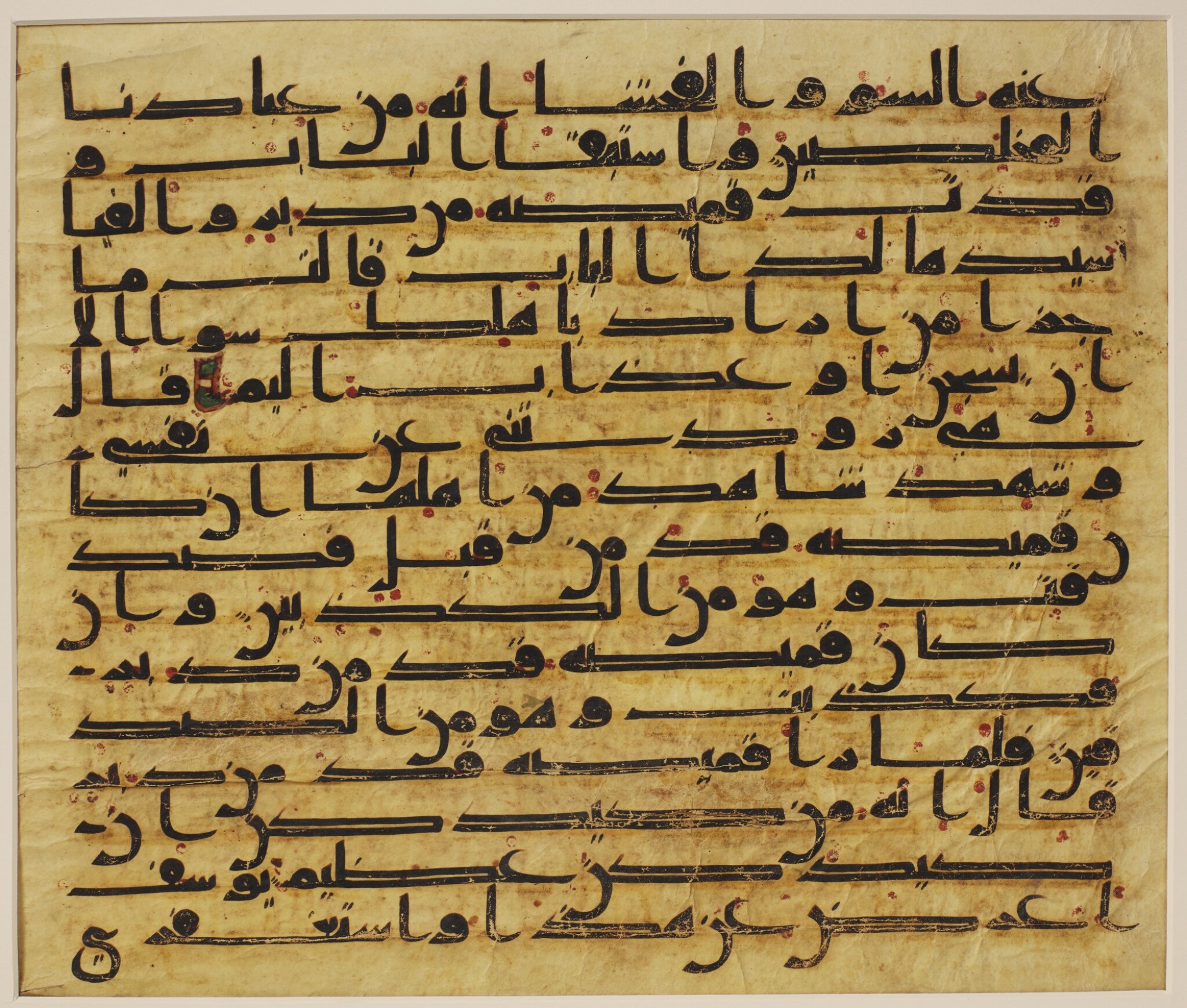 Arabic manuscript on vellum, 16 lines to the page written in bold Kufic in brown ink, vocalisation in the form of red dots, verses separated by three dashes in brown ink, fifth verse marked by a white and green alif outlined in red

The hairy side (recto) with losses to the ink and some traces of tape used to consolidate two splits, restorations to the margins, the flesh side (verso) with minor losses to the ink, some creases and traces of folds, smudges and stains, as viewed.

This Qur'an leaf and that of lot 5 come from a dispersed Qur’an of great interest, which is notable for its distinctive script and unusual illumination.

This Qur’an has been attributed by Professor Déroche to the late eighth century. It is written in an ‘independent’ style, denominated by Déroche as F.1, which combines characteristics of different groups. The alif resembles that of group D, while the medial form of ha’ is often closer to group C (Déroche 1992, p.120-1). The palette of the illumination is predominantly green and brown; the ‘ashr and khamsa verse markers are respectively indicated by a roundel and an alif in green, white and red, while the single verses are separated by three dashes in brown ink. This way of marking the verse is associated mostly with Qur'ans in Hijazi script and a few early Kufic manuscripts; the diacritical stokes are a later addition. As visible in the recto of lot 5, the surah titles are written in red and in a smaller Kufic squeezed within a green and brown cartouche. They are written in an identical script to that of the main text and it is possible that they were included by the original scribe after the completion of the manuscript. Another leaf with a surah title very close to the current one (from the surah immediately before, surah Luqman, XXXI), was sold at Christie’s London, 15 October 1996, lot 47. Curiously that leaf was also cropped at the bottom with only thirteen legible lines.

Other leaves from this manuscript are in museums and private collections worldwide, including the Los Angeles County Museum of Art; the David Collection, Copenhagen; the Tareq Rajab Museum, Kuwait, and the Nasser D. Khalili Collection, London. Examples have appeared at auction over several decades, most recently in Sotheby's Doha, 16 December 2010, lot 144; Sotheby's London, A Princely Collection, 5 October 2010, lots 1-4 (two with decorated surah headings), and 24 October 2007, lot 2, where a further listing is given. Leaves with illuminated panels are very rare, only four having appeared on the market (Christie's London, 15 October 1996, lot 47; Sotheby's London, 8 October 2008, lot 1 and 29 April 1998, lot 2; Bonhams London, 1 May 2003, lot 1.