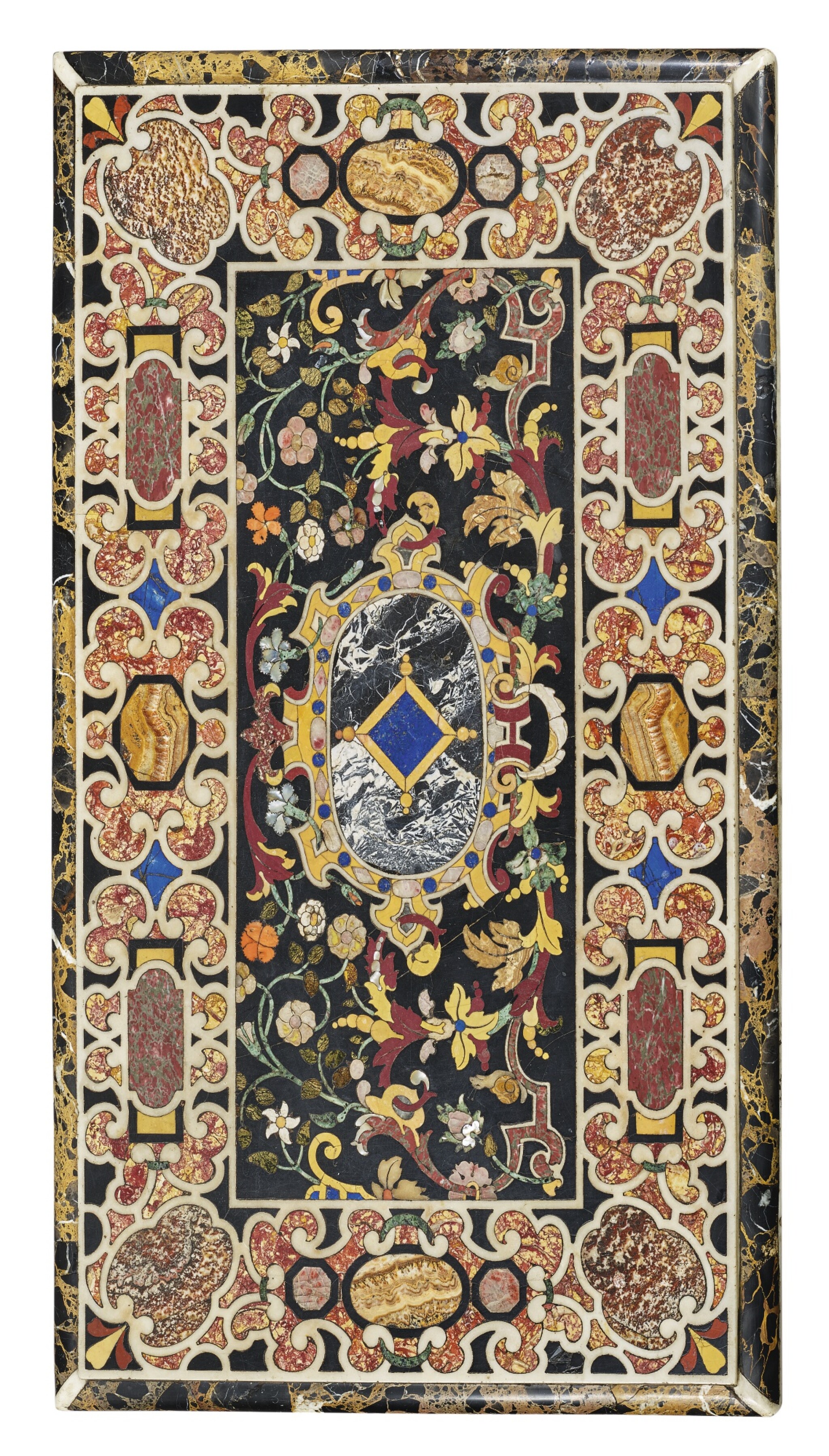 Inspected on 20 March 1992 by Dr Annamaria Giusti, who confirmed the attribution and dating to circa 1610

The technique of coloured marble and hardstone geometric inlay dates to ancient Rome, where it was called opus sectile, and it was in 16th-century Rome where the art was revived to supply aristocratic and ecclesiastic patrons. Its popularity quickly spread to other Italian centres, and in 1588 Grand Duke Ferdinand I de'Medici founded the Galleria dei Lavori in Pietre Dure in Florence as a rival to the Roman workshops, originally to supply the Medici family palaces and chapels, and later producing table tops and panels for a wider clientele. Renamed the Opificio delle Pietre Dure in the mid-1800s, the workshop continues to operate to this day. The present lot is a rare example of the little-documented exchanges between the two centres in the early decades of the Galleria dei Lavori's existence. The composition of a large oval marble specimen surrounded by a border of symmetrically disposed cartouches is an archetypal Roman characteristic of last quarter of the sixteenth century. However, the richly varied chromatic palette and introduction of more naturalistic motifs such as floral sprays and snails is a Florentine invention, also seen for example on an early square table top from the Grand Ducal Workshops of c.1700 now in the Museo degli Argenti, Florence (Fig.1; illustrated in A.M. Giusti, Pietre Dure. The Art of Semiprecious Stonework, London 1996, p.23 fig.18). Two further early Florentine tops of square format with a Roman-style arrangement of a central octagonal panel bordered by strapwork cartouches but integrating floral sprays, are in Hatfield House, Hertfordshire, England and the Villa Reale, Milan (illustrated in A. González-Palacios, Las colecciones reales españolas de mosaicos y piedras duras, Madrid 2001, p.90-91).

Artistic tendencies could travel in both directions, however, as birds, insects and snails do appear in two monumental table tops produced in Rome in c.1600 now in National Trust collections (Powis Castle, Wales and Charlecote Manor, Warwickshire). Stylistically, they are related to an important table in All Soul's College, Oxford signed by Pietro Carli, a Florentine craftsman believed to be working in Rome in the late 16th century (ill. Giusti, p.38 fig.27), a further illustration of the links between Florentine and Roman work during this period. However, by the mid-17th century the Galleria dei Lavori's production had moved definitively away from the Roman tradition of geometrical composition in favour of naturalistic subjects with floral and fauna becoming the predominant decorative motifs, making the present top an important testament to the Grand Ducal Workshop's earliest production.

The incorporation of a lapis-lazuli lozenge in the central oval is extremely unusual, as this shape was normally reserved for border decoration, as in the 16th-century Roman table owned by Cardinal Richelieu (Paris, Louvre; ill. in S. Castelluccio, Les Meubles de Pierres Dures de Louis XIV, Dijon 2007, p.14-17). Of a particularly vivid blue that was highly favoured by the early Florentine stonecutters, this material was beautifully exploited in some of their most magnificent creations, such as the table designed by Giorgio Vasari for the Medici family and later in the Duke of Westminster's collection (recently on the London art market); also the top with the coat of arms of Maximilian I, Elector of Bavaria (Munich, Residenz) and that supplied to the Grimani family in Venice and later owned by the Earls of Warwick at Warwick Castle (sold Sotheby's London, 10 December 2015, lot 201; 3,509,000 GBP with premium).