The Gilded Age Revisited: Property from a Distinguished American Collection 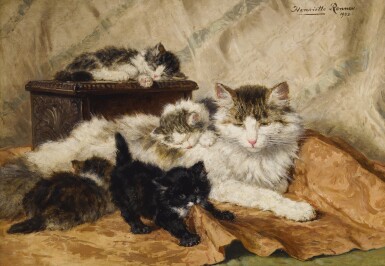 Henriette Ronner-Knip | A MOTHER AND HER KITTENS

Henriette Ronner-Knip | A MOTHER AND HER KITTENS

A MOTHER AND HER KITTENS

Examined in the frame. Oil on panel. There are a few isolated areas of very faint craquelure in the background and on the nose of the mother cat. Under UV: varnish fluoresces green unevenly. There are two finely dappled spots of inpainting in the background; three on the behind of the highest kitten; and a few scattered pin dots of retouching in the blanket at lower left. Finely applied inpainting along and near the lower edge.

Henriette Ronner-Knip was destined to become a painter, as her father, grandfather, uncle, and aunt were all artists. A precocious talent, she studied with her father, Josephus Augustus Knip (1777-1847) who was a painter of landscape and animals, and first exhibited publicly at the age of sixteen. In the first years of her career, Ronner-Knip found success as a landscapist, though by the 1860s she turned to depictions of beloved household pets - especially kittens – which appealed enormously to a voracious buying public and earned her the title "Queen of Cat Painters."

A consistent exhibitor at the Royal Academy in London from 1891 to 1903, her paintings were shown throughout Europe and further abroad, with some of her works included in the 1876 Philadelphia Centennial Exhibition. Her charming compositions, in which cats and kittens have distinct and playful personalities, struck a chord with patrons throughout Europe from the rising middle-class to members of the aristocracy. Amongst her royal supporters she counted the royal family of Belgium, Don Fernando, King of Portugal, Kaiser William I of Germany, the Duchess of Edinburgh and the Prince of Wales. In 1887, Ronner-Knip was awarded the Belgian Cross of the Order of Leopold, making her one of the few women to hold the oldest and highest order of Belgium.