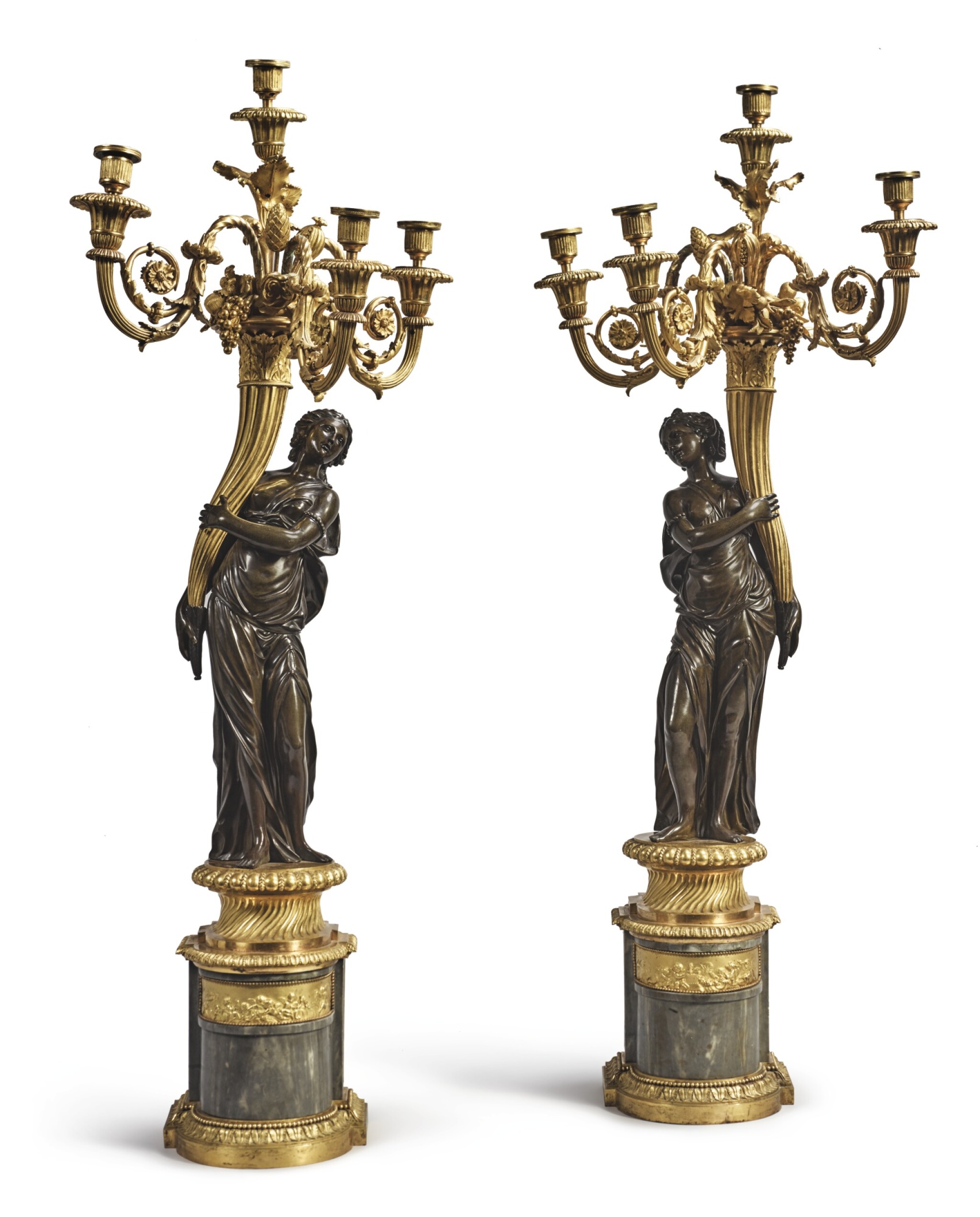 on bleu turquin marble bases; drilled for electricity. With a later pair of round fluted white marble columns.

Minor rubbing and slight tarnishing to gilding. Repaired breaks to two candle arms on one, and possibly one on the other. Pierced for electricity. Small dent to back of arm on one female figure, not very visible. Bronze with nice patina. Attractive marble with only minor surface discolouration and very small scattered chips. Both with a small area of infill to the marble immediately under the top gilt bronze gadrooned edge. Beautiful marble and impressive scale, ready to use.

The design for this prestigious model is related to a drawing for a candelabra in the form of a cornucopia-bearing Bacchante, attributed to the prominent Louis XVI-era bronzier François Rémond (1747-1812), now in the Musée des Arts Décoratifs, Paris (reproduced in H. Ottomeyer and P. Pröschel, Vergoldete Bronzen, Munich 1986, Vol. I, p.283, fig.4.14.4). It has been suggested this sheet formed part of the portfolio of the leading marchand mercier Dominique Daguerre and represented a visual record of a work for sale, rather than functioning as working drawing for a bronze manufacturer. The ultimate inspiration for the design was arguably the set of twenty-four life-size torchères in the form of female figures carrying cornucopiae supplied by Babel in 1769 for the Galerie des Glaces at Versailles, the design for which has been attributed to the sculptor Louis-Simon Boizot (1743-1809). Daguerre supplied two pairs of this model in the 1790s to the Prince of Wales (later George IV) for his London residence Carlton House (Royal Collection 2695). They were originally placed in the South Anteroom, where they are visible in Charles Wild's watercolour of the room produced for the engraver Pyne's 1819 Royal Residences (Carlton House: The Past Glories of George IV's Palace, London 1991, no.190, p.211-12). They were later recorded in the Throne Room of St James's Palace in 1827 and eventually transferred to Buckingham Palace, where they have been in the White Drawing Room since 1915 (illustrated in J. Harris et al., Buckingham Palace and its Treasures, New York 1968, p.58- 59). One pair is on the mantelpiece adjacent to the famous secret door to the private apartments, and the other placed on the chimneypiece in front of which HM Queen Elizabeth II recently delivered her annual Christmas Speech in 2018.

Another identical pair was in the Wildenstein Collection, sold Christie's London, 14 December 2005, lot 27 (142,400 GBP with premium), and a further pair was sold at Tajan, Paris in 1987, illustrated in G. Wannenes, Eighteenth Century French Furniture (2000), p.241. Another nearly identical version but with white marble bases is in Louis XVI's Library in the Appartement Intérieur du Roi at Versailles. Related models with similar cornucopiae-bearing classical females but bases of different design include a pair and a set of four in the Wallace Collection (P. Hughes, Wallace Collection Catalogue of Furniture, London 1996, Vol.III no.251), and a pair sold Christie's London, 6 July 2016, lot 60.

The distinctive design of the bases is more commonly encountered on candelabra incorporating a bronze cupid after the marble L'Amour Menaçant, created by Etienne-Maurice Falconet for Madame de Pompadour in 1757. One pair of this model is in the Wallace Collection (Hughes, cat. no.250), and Daguerre supplied several versions to important noble clients including the 1st Earl of Harewood for Harewood House (in situ) and Count Stroganoff in St Petersburg (sold Christie's New York, The Riahi Collection, 2 November 2000, lot 24).

François Rémond became a master ciseleur-doreur (chaser and gilder) in 1774, and along with Pierre Gouthière was one of the most important artists working in gilt bronze in late 18th-century Paris. In addition to supplying candelabra, clock cases and fire dogs to the Royal Household and wealthy members of the court, he also supplied gilt bronze furniture mounts to the leading cabinetmakers of the late Ancien Regime, including Riesener and Roentgen. His collaboration with the dealer Dominique Daguerre, who settled in London in the late 1770s, also gave him access to leading English aristocratic clients.