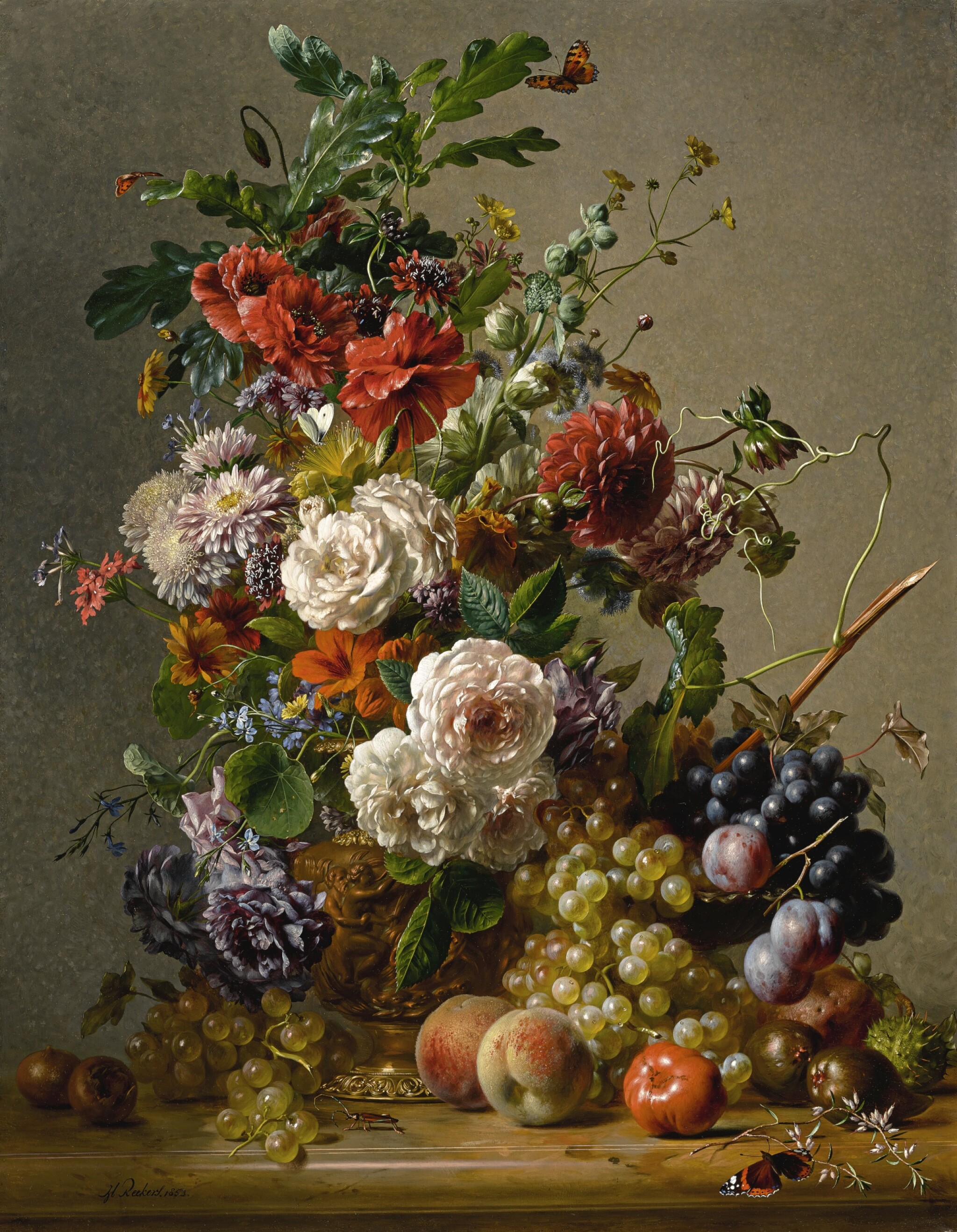 DAHLIAS, NASTURTIUMS, ROSES AND OTHER FLOWERS IN A COPPER EWER WITH PLUMS, GRAPES AND PEACHES ON A MARBLE LEDGE

The following condition report was kindly provided by Simon Parkes Art Conservation, Inc.: This work is in beautiful condition. It is painted on a panel which is flat. The paint layer is cleaned and varnished. There are no damages visible. There are no retouches of any note. There may be a spot or two of retouching in the background, but essentially this picture is in perfect state and should be hung as is.

Acquired from the above in 2001

Though his career was short lived—he died at the young age of thirty-nine— Hendrik Reekers experienced international success throughout his lifetime, and the present work demonstrates his immense passion and skill. Born in Haarlem, he first studied under his father, the still life and genre painter Johannes Reekers the Elder (1790-1858), before training under Georgius Jacobus Johannes van Os (1782-1861), the foremost still life artist of the mid-nineteenth century. Reekers went on to teach at the Stadstekenschool Haarlem and continued to exhibit in Haarlem as well as The Hague, Amsterdam and at the British Institution in London.

Dahlias, Nasturtiums, Roses and Other Flowers is exquisitely rendered. The full blooms are thoughtfully and carefully arranged against a cool grey background, heightening the riot of colors and unique architecture of each individual flower, fruit and stem. Spilling over the edges of the ewer and onto a ledge, the bouquet retains a sense of wild nature. No detail has been spared, from the minuscule drops of water that delicately linger on the grapes, to the reflection of light on the fruit and the flaming orange and white pattern of the butterfly’s wings, all of which have been given considerable attention.

Reekers' meticulous depiction of flora, fauna, and fruit, as well as the classical nature of his composition, pays homage to the artists of the Dutch Golden Age, many of whom were from the artist’s hometown of Haarlem. Masters and innovators of seventeenth century still life painting, such as Pieter Claesz and Willem Claesz Heda, had a heavy influence on Reekers, whose canvases were contemporary reinterpretations of one of the most revered genres of painting in The Netherlands.