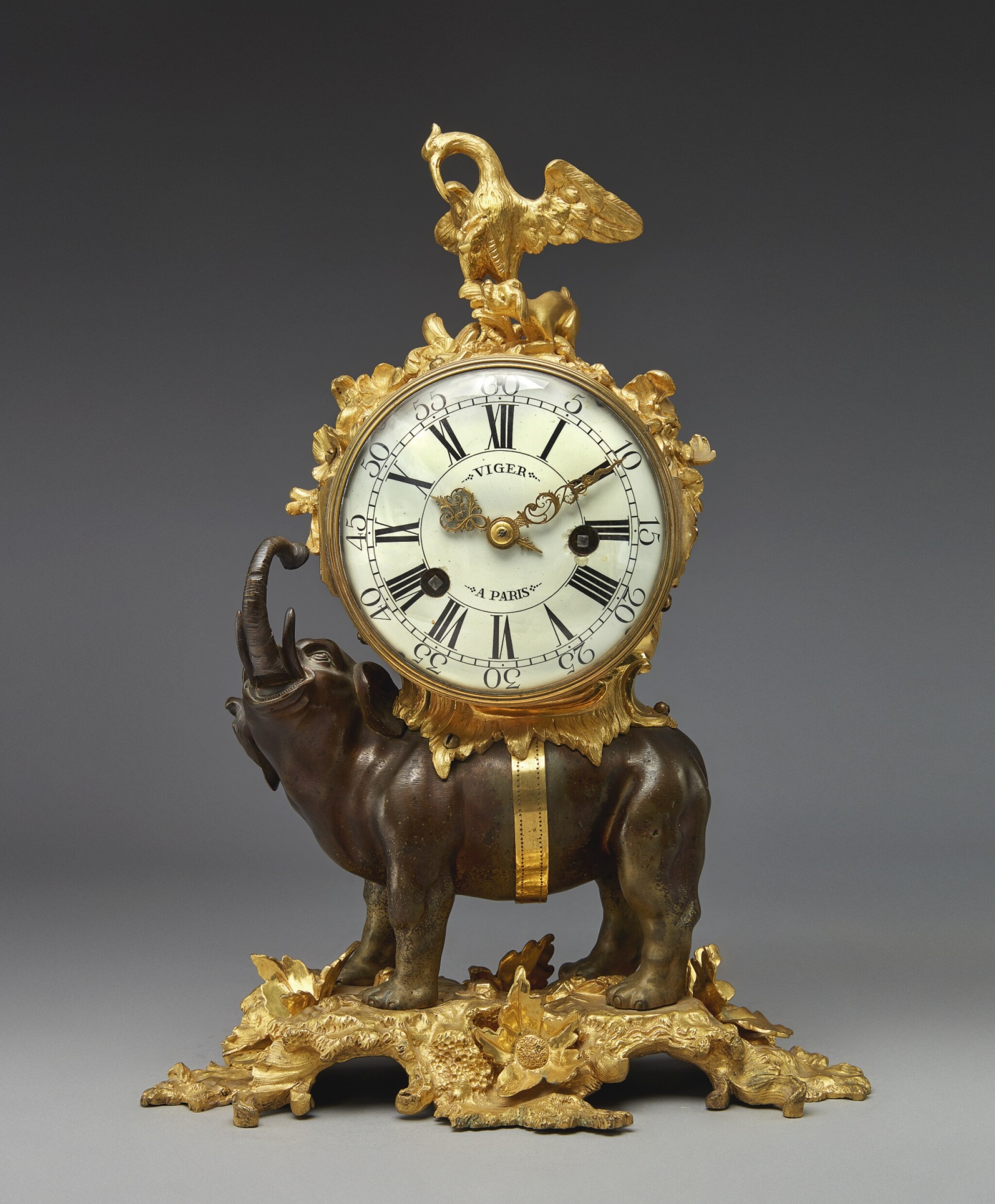 the dial signed VIGER A PARIS; the movement signed Viger Paris no 665

In good conserved condition and ready to use. Scattered small age cracks and old repaired age splits to the sides commensurate with age and use, and a few patches and cracks to the tortoiseshell. Rubbing and minor losses to gilding and small scratches to the brass. Scuffs and age splits to feet. Mounts mostly re-gilt. A few chips to marble along back edge.

One distinctive aspect of the taste for exoticism in mid-18th century French decorative arts was an interest in the animal kingdom, and nowhere was this more evident than in designs for clock cases, which incorporated bulls, lions, rhinoceroses and most commonly elephants, as in the present lot. This particular model was very popular and was produced by several leading bronziers of the Louis XV period, notably Jean-Joseph de Saint Germain (Paris 1719-1791). The form appears to be based on elephants in Japanese export porcelain that began arriving in the West in the late 17th century and were later copied by Meissen and St Cloud (cf. a pair of Kakiemon elephants in Burghley House, England). Several variants of the design exist, all with the same elephant on a rockwork base but with different figures surmounting the clock case. The most commonly encountered cresting is a Chinese figure or monkey holding a parasol, seen for example on a clock with a movement by Jean-Baptiste Baillon in the Bamberg Residenz, illustrated in H. Ottomeyer et P. Pröschel, Vergoldete Bronzen (Munich 1986), Vol.I, p.124, fig.2.8.5; or alternatively a cherub holding a sundial, as in a version also with a movement by Viger and surmounting a music box, offered by the Prince de Ligne to Tournai Cathedral, illustrated in P. Verlet, Les bronzes dorés français du XVIIIe siècle (Paris, 1999), p.192, fig.219. A comparable The present lot is a rarer model, referred to in old inventories as a pendule à l'échas­sier and depicting a heron or wader surprised by a hound. A similar clock with movement by Baillon was in the Anna Thomson Dodge Collection, Rose Terrace, Grosse Point Farms, Michigan, sold Christie's London, 24 June 1971, lot 39, and two further échas­sier versions also with movements by Baillon include one sold Sotheby's Paris, 27 April 2017, lot 122, and another attributed to Saint-Germain sold Thierry de Maigret, Drouot Paris, 18 October 2017, lot 386.