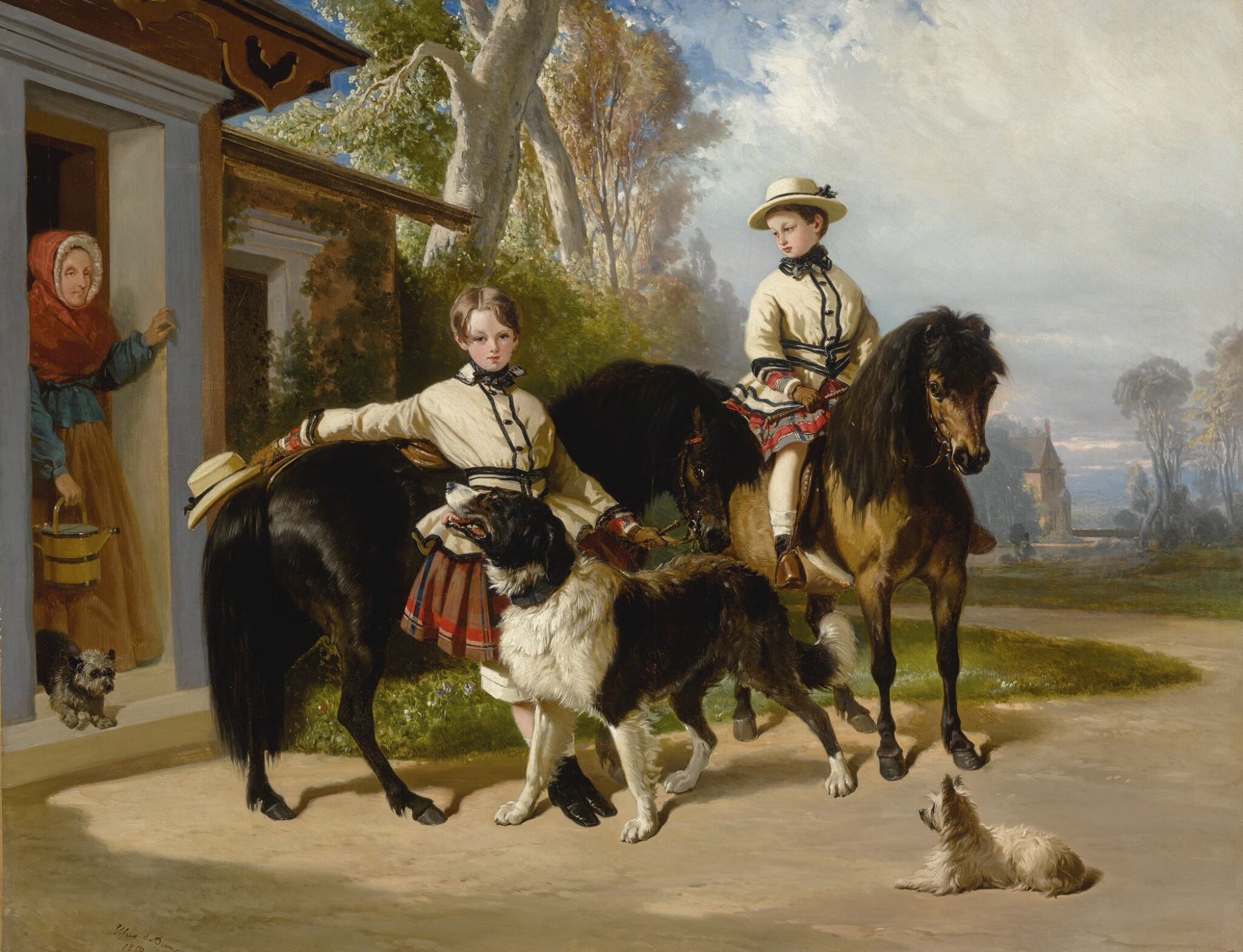 This work is in very good condition overall. The canvas has a glue lining which is nicely stabilizing the paint layer. In the animals and figures, the only retouches seem to be in the chin and forehead of the young man to the left standing in front of the black horse. In the sky, there is one restored structural damage in the upper right, measuring about 2 or 3 inches, along with some smaller spots of retouching. There are otherwise no retouches of any note. The work should be hung in its current state.

Alfred de Dreux is known first and foremost as an equestrian painter, and in the mid-nineteenth century his name was synonymous with the depiction of the horse. De Dreux was born into a wealthy French family of artists. His father, Pierre-Anne Dedreux, an architect, won the Grand Prix de Rome for a project at the École Polytechnique. De Dreux received his first art lessons from his uncle, Pierre-Joseph Dedreux-Dorcy, the first owner of The Raft of Medusa (1818-19, Musée du Louvre, Paris) by Théodore Géricault, with whom he shared a studio. Géricault was an intimate friend of the family and he painted several portraits of the young De Dreux, one of which is in the collection of The Metropolitan Museum of Art, New York. In 1823, De Dreux began studying with Géricault, a fellow lover of horses, and in his studio the artist learned to draw horses mounted by riders. After Géricault’s death, the artist went on to study with the French history and portrait painter Léon Cogniet.

De Dreux enjoyed early success, both professionally and socially. During the July Monarchy reign of King Louis Philippe I, he became a sought after portraitist. He often depicted his elegant sitters in landscape settings astride their spirited horses and accompanied by their favorite dogs, as in the present lot. By the 1840s, De Dreux had won the favor of the French Royal Family. In 1842, he was commissioned by the French State to paint Portrait équestre du duc Ferdinand d’Orléans (circa 1842-43, Musée des Beaux-Arts, Bordeaux), which was exhibited at the Salon des Artistes Français in 1844. The present lot was completed in 1850, following two preparatory pencil sketches of each boy in 1848 and 1849, respectively. Recent scholarship has identified the two boys as Prince Philippe d’Orléans, Count of Paris (1838-1894, at left), and Prince Robert Philippe Louis Eugène Ferdinand d’Orléans, Duke of Chartres (1840-1910, at right), the two sons of the abovementioned Ferdinand d’Orléans and grandsons of King Louis Philippe. The Orléans family went into exile in Surrey, England after Louis-Philippe abdicated the French throne in 1848. Philippe and Robert Philippe were exiled along with their extended family and would have been in the United Kingdom between 1848 and 1850. Between 1850 and 1852, De Dreux is known to have been in Twickenham, Surrey under the employment of Henri d’Orléans, Duke of Aumale, the uncle of the two princes, and it is likely that the artist became acquainted with the two young boys in England through the Duke.

The sitters are dressed in Scottish costume, though the reason for the choice of dress in this particular portrait is unknown. The present lot has been previously identified as a portrait of the children of Colin Dunlop of Lanarkshire, Scotland, and it is possible that there is another version of this composition, the whereabouts of which has long been unknown, that depicts the Dunlop children. The princes may have traveled to Scotland during their time in exile, or perhaps more likely, the present work may have been inspired by the Dunlop portrait.