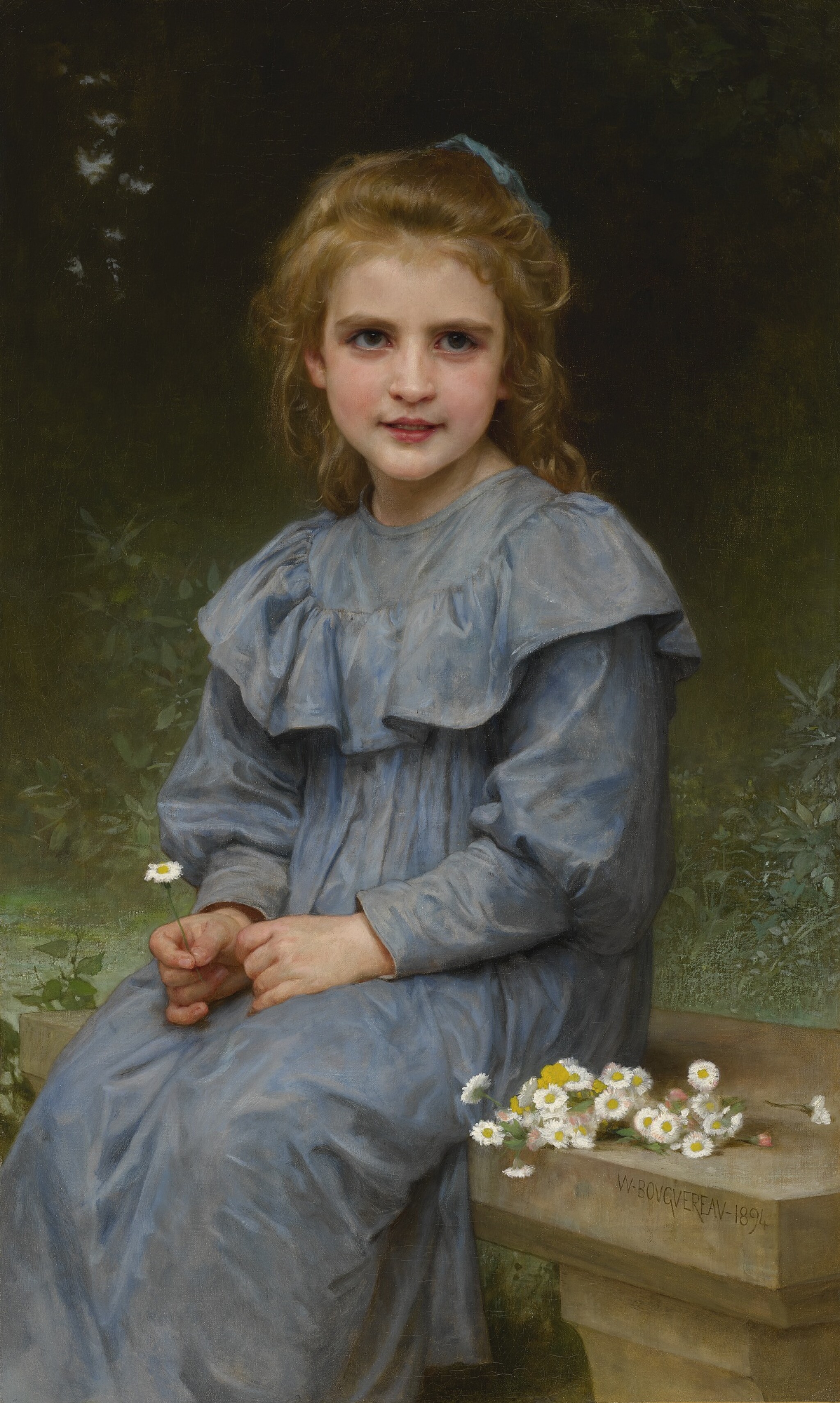 The following condition report was kindly provided by Simon Parkes Art Conservation, Inc.: This painting is in lovely condition. The canvas is lined with a non-wax adhesive. The paint layer is cleaned, varnished and retouched. There are no retouches visible, either to the naked eye or under ultraviolet light, to the figure. There are a few tiny retouches in the background above the top of the head and to the right of the head. There are one or two small, isolated retouches elsewhere in the upper background, but overall the condition is very good and the work should be hung as is.

While many of William Bouguereau's iconic peasant girls stare with melancholic expressions, the young girl in Pâquerettes, who wears a silk dress with ruffled collar and matching bow, smiles with conviction. The present work reaches for universal themes of childhood and contains many elements that made Bouguereau compositions so instantly recognizable. The stone bench set in a deep forest and the inclusion of a narrative prop, for example, are typical features of the artist’s oeuvre, and the daisy serves as a familiar symbol of childhood innocence. The official title Pâquerettes takes this work out of specificity and towards a universality for which Bouguereau's paintings of children have come to be celebrated.

The first known private owner of the present work was Theodore E. Smith of Brooklyn, New York, who purchased Pâquerettes from Knoedler & Co. in 1895. Smith was the president of the Spencerian Pen Company and was considered a patron of the arts and culture in his native Brooklyn Heights. The son of a former mayor of Brooklyn Heights, he lived in the Smith mansion at 73 Pierrepont Street (now demolished) where this painting likely hung. In 1895, Pâquerettes was exhibited at the annual reception of the Rembrandt Club in Brooklyn, a private club of "about 100 rich and influential patrons of the arts" (The Brooklyn Daily Eagle Almanac, Brooklyn, New York, 1895, vol. X, p. 184). The location of the reception was the Pouch Gallery on Clinton Avenue, which was housed in the ballroom of what would become known as the "Pouch Mansion," regarded at the time as one of the best known houses in Brooklyn. In the 1890s, Pouch Mansion held many a glamorous social gathering for a variety of private clubs and an invitation inside its walls was highly sought after. A local journalist remarked how the Rembrandt Club reception was "an event of recurring pleasure and interest to the artistic element in society" (Brooklyn Life, p. 9), taking "great pleasure" in reviewing the Bouguereau of "a little girl with a sweet, pensive expression" (Brooklyn Life, p. 9). Bouguereau was a favorite artist of American business tycoons in the late nineteenth century, and the present work is among many that have remained in the United States for over 100 years.